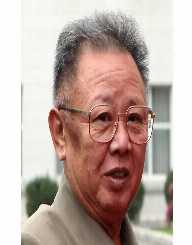 Yuri Irsenovich Kim was born on February 16, 1941, in Khabarovsk Krai, Russia. His name was later changed to Kim Jong-il, which is what he is best known as now.  His parents were Kim Jong-suk and Kim Il-sung. Sadly, Kim Jong-suk, his mother, died when he was still a child. Now, his birthday is a holiday celebrated by the North Korean people. This holiday is known as the Day of the Shining Star.

At the time Kim Jong-il was born, his parents lived in exile in Russia. Japan and Korea were at war during this time, and it was not safe to live there. It was not until after World War II that his family returned to Korea. In the following years, his father would take power in Korea (which would later be divided into North and South Korea), making his family almost like a royal family.

Kim Jong-il graduated from Namsan Higher Middle School in 1960. After finishing this school, he attended Kim Il-sung University. There, he studied economics, military science, and philosophy. He graduated from this school in 1964.  It is not known for sure or not, but some sources say he also attended the University of Malta in the 1970’s.

While still studying at University, Kim Jong-il began to work within North Korea’s government in 1961. However, he was not extremely involved in politics until after he graduated from University, in 1964. After this time, he began to rise up the ranks his in the political party (the Worker’s Party).

While part of the Worker’s Party, he also founded the Three-Revolution Team Movement. This movement helped to train political members, as well as scientists and military personnel. One of the goals of this group was to improve North Korea’s economy.

In the 1980’s, he joined three major branches of the North Korean government: the Military Commission, Politburo, and Secretariat. All in all, he basically controlled the Korean government, even though his father was still the Supreme Leader of the country.

In the early 1990’s, he was made the Supreme Commander of the Korean People’s Army. However, this was pure nepotism, as his father appointed him to the position. Prior to this, Kim Jong-il had no military experience. He had never fought in the North Korean army. He had studied military tactics in school, but he had no formal military training. A short time later, he was also appointed as the chairman of the National Defence Commission.

Throughout the early 1990’s, before he was the Supreme Leader, North Korea began focusing on isolationism. This meant that the country was trying to be self-reliant and wasn’t trading much with other countries. This measure was meant to help the economy, but it only ended up hurting it. One of the major issues related to the isolationism was that a mass famine occurred in the country. Many North Koreans died during this time.

Kim Jong-il was married to Kim Young-sook. They had one daughter together, Kim Sul-song. It was also well-known that he had several mistresses, who he also had children with. The children he had with his mistresses are Kim Jong-Nam, Kim Jong-Chul, Kim Jong-un, and Kim Yo-jong.

Kim Jong-il died on December 17, 2011, in North Korea. The cause of his death was a heart attack. He was 70 years old when he passed away. He was succeeded as Supreme Leader by his son, Kim Jong-un, who is currently (2017)  the Supreme Leader of North Korea.