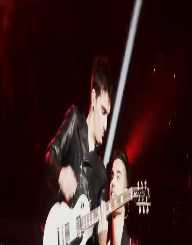 Tom Parker was born on the 4 August 1988 in Bolton, Greater Manchester, England. Bolton is a city quite close to Manchester. At sixteen, Parker started teaching himself to play the guitar.

Tom Parker enrolled at Manchester Metropolitan University but left without taking his degree because he had become more interested in pursuing a career in music.

Tom Parker once auditioned for The X Factor but was eliminated early in the competition.

He later played in a band Take That II which toured the UK. The bank was a tribute bank to the UK group Take That. Then in 2009, an audition for a new boy band was announced. After nationwide auditions with a thousand applications, Tom Parker was chosen to become a band member. The band was called Wanted and went on to have two number one hit singles in the UK.

Tom Parker is a singer, songwriter, and guitarist and in 2015, he released a solo album Undiscovered. In 2016, he announced that he was going on tour with the Grease Musical in 2017.

His long-term partner is Kelsey Harwick, and the couple got engaged in 2016.

He has taken part in Celebrity Masterchef in the UK and was eliminated in the semi-finals.