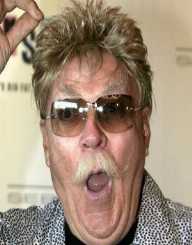 Rip Taylor was born on January 13, 1935. He is an American actor. He is also a comedian. He was renowned due to his ‘It Ain’t All Confetti’ stand up show. He was also known as a Crying comedian. He is well and mostly known for his moustache. He is currently Eighty-three years old.

Rip Taylor was born Charles Elmer Taylor Jr. on January 13, 1935, in Washington D.C, United States. He was born to Charles Elmer Taylor Sr. who was a musician, and Elizabeth Taylor was a waitress. He lived in foster care where he had a rough stay. He was educated. He later worked as a Congressional page. He after that joined the United States Army. He served in the Korean War.

Rip Taylor started his career as a stand-up comedian performing in clubs and restaurants while in the United States Army. He was later picked to join ‘The Ed Sullivan Show’ where he appeared severally. In 1963, he appeared in ‘The Jackie Gleason Show’ as a guest. In 1966, he performed in his first live big show in Las Vegas alongside Eleanor Powell and Judy Garland.

In the 1970s, Rip Taylor appeared in shows such as ‘The Gong show,’ ‘Hollywood Squares’ and ‘To Tell the Truth’ all like a celebrity guest panelist. He later featured in ‘The Match Game.’ He as well appeared in ‘Sigmund and the Sea Monsters’ as Sheldon. He later played as Jack Merrill in ‘The Brady Bunch Hour.’ He later hosted ‘The $1.98 Beauty show’ for beauty pageants.

In 1977, he made appearances in ‘The Happy Hooker Goes to Washington’ and Chatterbox’ comedy movies. In 1978, he appeared as a guest in ‘1990’s Match Game’. In 1979, he featured in ‘Scooby Goes Hollywood’ movies as C. J’s voice. He later featured in ‘The Kids in the Hall’ television show. He also appeared in ‘Wayne’s World 2’ as Rip Taylor. He later got fortunate by being among ‘Wayne Stock’ guest invitees.

In 1997, he appeared in shows such as ‘Beyond Belief: Fact or Fiction,’ ‘The Man in the Model T.’ He as well appeared in an episode of ‘Easy Come Easy Go’ film. He later featured in ‘Zork: Grand Inquisitor’ a graphical adventure game as Chief Wardle. In 2002, he featured in ‘Jackass The Movie.’ In 2003, he featured in ‘Will & Grace.’

In 2005, Rip Taylor played a role in ‘George Lopez.’ He featured in the film ‘The Dukes of Hazzard’ remake. He later featured as a guest starring in ‘Life with Bonnie’ and ‘The Suite Life of Zack & Cody’.  He also appeared in film such as ‘The Emperor’s New School’ and ‘Super Robot Monkey Team Hyperforce Go!’. He later appeared as a guest in ‘X-Play’ a video game review show. In 2006, he appeared in D.C.’s Capital Parade as Washington’s Grand Marshal.

Rip Taylor married Rusty Rowe with whom he divorced later on. He is currently Eighty-three years of age.