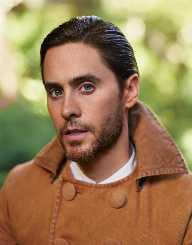 Jared Leto is a renowned rock music singer come actor, the co-founder of 30 Seconds to Mars.

Jared Leto who is also known as Joseph was born on the 26th December 1971. He is a native of Bossier, Louisiana. Leto was raised by a single mother, his parents divorced after his birth. Jared’s mother Constance Leto was an artist who traveled a lot. The family moved a lot in search of greener pastures to quench their financial thirst. Despite the financial struggle, Leto and his older brother Shannon developed an irresistible interest in arts. Their mother played a great role in influencing and nurturing their talents.

Leto went to Flint School and later to Emerson Preparatory school. He graduated in 1989 despite his difficult childhood. Leto enrolled at the Philadelphia University. Upon realizing his passion for acting, Leto switched his career interests. He moved to New York City where he went to the School of Visual Arts and specialized in film making.

Leto got his first acting job in 1992. He had moved to Los Angeles, California to pursue his career in acting and music. Leto took up a role in a Cameo, Camp Wilder television show. He came into limelight when he played a role as Claire Danes' love interest. He was cast as Jordan Catalano in a show called My So-Called Life, in 1994-95. In 1995, Leto took up a role in a drama film How to Make an American Quilt.

In 1996, Leto was given the lead role in the film, The Last of the High Kings’. This was a film based on teenage experiences. Leto got other roles in The Thin Red Line in 1998. This was a film directed by Terrence Malick. This was followed by Fight Club in 1999, under the direction of David Fincher. The Film starred prominent actors like Brad Pitt, Helena Carter and Edward Norton. Leto also engaged in a drama film Girl, Interrupted. He played the character of Toby Jacobs. The movie is memorable for co-starring big names like Angelina Jolie and Brittany Murphy.

In 2000 Leto got his greatest breakthrough. He was featured in American Psycho alongside Christian Bale, a movie directed by Mary Harron. His major breakthrough came with the film Requiem for a Dream. He played the role of a drug addict as Harry Goldfarb alongside Jennifer Connelly, Ellen Burstyn, and Marlon Wayans. Leto received several award nominations for his role. The movie was directed by Darren Aronofsky.

Leto sacrificed a lot in dedication to the success of his role in this movie. It is believed that he spent most of his time in the streets of New York City. He suspended intimacy with his then fiancé Cameron Diaz.  He lost significant weight to portray the image of a real addict. Leto broke up with his fiancé in 2003. His dedication was reflected in his role as a drug addict, leading to the applause from his fans. Leto is believed to have dated several women but settled down with none.

Leto and his elder brother Shannon founded the band in 1998. Leto is the group’s lead singer and guitarist, while Shannon plays on the drums and other instruments. Tommo Milecevic completes the trio.

The group won the MTV Video Music Award for the Best Rock Video in 2013 after releasing the song, Up in the Air. They also released their 4th album Love, Lust, Faith, and Dreams in the same year. Their followers and supporters are nicknamed the echelon. The band commands a huge following, especially in Europe. 30 seconds to Mars has progressed with time. By 2013 the band had sold more than 10million copies of their 4th album. The rock band went into the Guinness World Record for holding the longest concert tour in 2011.

Leto is notably involved in several charities like Habitat for humanity. He is always on the forefront in serving and aiding during major natural disasters. He engages his band and friends in contributing to relief, earthquakes, and tsunamis.

Jared Leto braved his childhood challenges and focused on his life goals and achievements. Being raised by a single mother in a financially strained environment never deterred him from achieving is life goals.