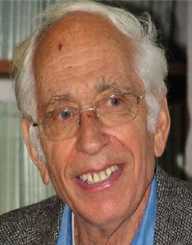 Sir Aaron Klug was born on August 11th, 1926. He was a Nobel Prize winner in 1982 for his contribution in Chemistry. To earn this award, he had developed the crystallographic electron microscopy.

Sir Aaron Klug was born on August 11th, in 1926. His place of birth was in Lithuania. His parents were called Lazar and Bella. His father worked as a cattleman whereas his mother was a homemaker. When Klug was aged two, his family migrated to South Africa. Here, he went for his early education at the Durban High School. He also went for his college education in South Africa while studying at the University of the Witwatersrand. From this university, he studied Bachelor of Science and later did his masters at the University of Cape Town. Klug interest in the science field motivated him to go for further studies in England. He completed his Ph.D.in Cambridge at the Trinity College in 1953.

The same year after completing his Ph.D., Aaron Klug shifted to Birkbeck College where he worked with Rosalind Franklin in a laboratory that belonged to John Bernal. Together, the two developed a special curiosity in viral studies. It is from their research into viruses that Klug initially discovered the unique tobacco mosaic virus structure. Soon, he shifted to Cambridge where he worked at the Medical Research Council-MRC. Throughout the coming decade, Klug focused his attention on the development of his notable crystallographic electron microscopy. It is through this development that Klug was offered a Nobel Prize.

In Klug’s lifetime, there are several awards that Aaron Klug was bestowed with including the Louisa Gross Horwitz Prize in 1981. This was an award from the Columbia University. In the period from 1986 to 1996, he served as the Cambridge’s director in the Laboratory of Molecular Biology. Elizabeth II later knitted him in 1988. He also earned himself a spot at the Fellow of the Royal Society.

Aaron Klug tied the knot in 1948 with Liebe Bobrow. The couple had two children together.