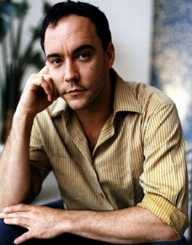 David John Matthews was born in Johannesburg, South Africa on 9 January 1967. Matthews’ parents, John and Valerie Matthews, had four children together. John Matthews worked for IBM as a physicist. The family often moved in Matthews’ early life, leaving South Africa in 1969 for New York and then moved to England for a year before returning to New York. It was in New York that Matthews attended his first music concert, a Peter Seeger performance.

Matthews began playing guitar aged nine. In 1977 Matthews’ father died of lung cancer and the family returned to South Africa. After leaving school, Matthews returned to America to avoid compulsory service in the South African military. He worked for IBM in New York before getting a job in a jazz bar in Virginia. It was here that Matthews decided to pursue a career in music.

Dave Matthews began performing in Charlottesville and collaborated with a number of friends he knew from his time working in a jazz bar. After some early collaborations and a false start with a band called ‘Devastator’, Matthews began writing his own songs and decide to start his own band. The Dave Matthews Band was formed in 1991 with a line-up of Dave Matthews (lead guitar and vocals), LeRoi Moore (saxophone), Carter Beauford (drums), Stefan Lessard (bass), Peter Griesar (keyboard and backing vocals) and Boyd Tinsley (violin and backing vocals). Before their first show Matthews had already penned the songs, ‘I’ll Back You Up’, ‘The Song that Jane Likes’ and ‘Recently’.

The Dave Matthews Band was signed by the RCA Records label in 1994 and released their first studio album ‘Under the Table and Dreaming’, which went platinum six times. There second album ‘Crash’ brought the band its first Grammy for the song ‘So Much to Say’. There third album ‘Before these Crowded Streets’ was the Bands first number one as it debuted number one on the Billboard chart in America, the album had the title track ‘Don’t Drink the Water’. ‘Before these Crowded Streets’ and the band’s fourth studio album ‘Everyday’ both went triple platinum.

The band also released a number of live albums, two of which went double platinum, ‘Live at Red Rocks 8.15.95’ and ‘Listener Supported’. In 2002, the band released ‘Busted Stuff’ which had the track ‘Where Are You Going’ which appeared in the film Mr. Deeds.

2003 saw Dave Matthews release his first solo album, ‘Some Devil’ and it contained the Grammy-winning hit ‘Gravedigger.’ Back with the Dave Matthews Band, Matthews released yet another number one album in 2005 with ‘Stand Up’ selling 465,000 copies in its first week. The band supported ‘Stand Up’ with a fifty four-date tour. The bands 2009 album ‘Big Whiskey and GrooGrux King’ was nominated for two Grammys and debuted at number one in America.

The GrooGrux King in the title referred to original band member LeRoi Moore who had died the year before the album’s release. The band’s 2012 album ‘Away from the World’ was the sixth straight album to reach number one, this tied the Dave Matthews Band with the Eagles for the most number one albums by an American band in history. ‘Away from the World’ remains the band’s most recent album, but the band has continued to tour extensively across the world since 2013.

Dave Matthews has also been a keen actor since the early 1990s when he would appear in amateur theatre in Charlottesville. He has appeared in a number of films. He has had a number of bit part roles in the Adam Sandler movies; I Now Pronounce You Chuck and Larry, Don’t Mess with the Zohanand Just Go With it. He played a more significant role in the movie Lake City. He also made an appearance in the 2011 films, The Other Side and In the Woods.

Dave Matthews married Ashley Harper in 2000, and the pair has three children, Stella Busina, Grace Anne and August Oliver. In 1994, Matthew’s eldest sister was murdered by her husband, following her death Matthews took joint custody of her children with his younger sister Jane.

Dave Matthews was raised a Quaker, and it was the pacifist beliefs of his faith that led him to avoid serving in the South African armed forces and moving to America. However, in 2009 Matthews claimed he was agnostic.