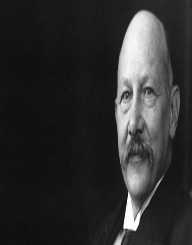 Heike Kamerlingh Onnes was a well-known Dutch physicist who scrutinized how materials behave when cooled at very low temperatures. While working alongside Johannes Bossacha, he provided experimental support for the Van der Waals theory on the behavior of gases. Following his continuous efforts and research, he was able to liquefy helium gas for the first time which led to his discovery of super conductivity. A theory that states that electrical resistance of some materials vanishes at very low temperatures. For his enthusiasm and continuous laboratory research, he earned a Nobel Prize in Physics in 1913.

Kameringh Onnes was born in Groningen, Netherlands on September 21, 1853, to parents Harm Kameringh Onnes and Anna Gerdina Coers. His father Harm was a brickworks owner in Groningen and his mother Anna was a daughter of an architect from Arnhem.

He had two siblings; his brother Menso Kamerlingh Onnes who was a reasonably known painter and a sister, Jenny who married a famous painter Floris Verster.

Kameringh obtained his secondary education at Hoogere Burger School in 1870. Since the school did not teach technical languages, he took extra tuition in Greek and Latin. Afterward, he was enrolled at the University of Groningen where he received his Candidates degree in 1871.

Heike Kamerlingh Onnes began his career by working as an assistant to Johannes Bossacha. He was a director of the Poltechnicum in Delft in 1878 before Onnes received his doctoral degree. Later in 1881 to 1882, he worked as a lecturer in place of Johannes Bossacha while carrying out his research. This is when he became familiar to the van der Waals and was greatly influenced by the professor of Physics at Amsterdam.

He published his first paper that dealt with the kinetic theory of the liquid state titled; ‘Algemeene theorie der vloestiffen’ (General theory of Liquids) on properties of matter at low temperatures. In April 1882, he was appointed the professor of Experimental Physics and Meteorology at the University of Leiden. During his inaugural address on the importance of quantitative research in physics, he stated his  life’s slogan ‘Knowledge through Measurement.’

As a professor of physics, he performed experiments in support of Van der Waal’s theory on the behavior of gases. During this research, he successfully built an apparatus which was able to liquefy air to a great quantity.

Later in 1894, he was successful in establishing the Cryogenic laboratory at the University of Leiden. This enabled him to specialize on perfecting cryogenic experimental techniques and studied metals and fluids at low temperatures in the years 1895 to 1906. While conducting his research, he kept in mind theoretical works of Hendrik Lorentz on the magneto-rotation of the plane of polarization and followed the theories of van der Waals regarding viscosity, capillarity among others closely.

In 1904, Onnes invited several scientists to the cryogenics laboratory a move that led to his recognition and high regard within the scientific community. He established a glass-blowing school in 1901 at the laboratory which earned international recognition.

His further research enabled him to build an improved hydrogen-liquefaction machine in 1906. His continuous efforts allowed him to liquefy helium in small quantities and using the Joule-Thomson effect on July 10, 1908; he was able to bring down the temperature to the boiling point of helium -269?C, 0.9? K. This was the lowest temperature ever to be reached that led to further research in the field. However, Onnes gave up gave up this quest of reaching lower temperatures and begun researching on the properties of liquid helium and developing an apparatus that would store the liquid helium.

This research led to a significant discovery that established that resistance of metal dropped when metal was cooled. He also tried to solidify helium but failed in his attempts. However, this was accomplished by his student Willem Hendrik Keesom in 1926.

His work on super conductivity received widespread recognition including the Nobel Prize in Physics in 1913. While undertaking his research, he guided some doctoral students who in later years became established as scientists. He finally retired in 1923.

Onnes married his girlfriend Maria Adriana Wilhelmina Elisabeth Bijleveld in 1887 and had a son Albert Kamerlingh Onnes who grew up to become a high ranking civil servant at The Hague.

Apart from his scientific endeavors, he took an interest in nature and aided his wife in humanitarian activities.  Such philanthropic activities included helping children in developing countries with food supplies. In the political arena, he leveled out political differences among scientists during the First World War.

Kamerlingh Onnes was awarded the Nobel Prize in Physics in 1913 for his investigations on properties of matter at low temperatures which further led to the discovery and production of liquid helium. Other medals he attained include the Matteucci Medal in 1910, the Rumford Medal in 1912 and the Franklin Medal in 1915.

Some apparatus he invented such as the device he used first to liquefy helium have been displayed in the lobby of the physics department at Leiden University. Other apparatus are showcased at the Boerhaave Museum in Leiden.

His student and successor Willem Hendrik Keesom was the first person able to solidify helium in 1926. Notably, the former Laboratory building Kamerlingh Onnes is currently the law faculty building at Leiden University. For his advances in low-temperature science, he was honored with the Kamerlingh Onnes Award.

Haike Kameringh Onnes suffered from poor health and died at the age of 72 on February 21, 1926, at Lyden, the Netherlands after a short illness.