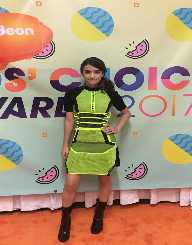 Soni Nicole Bringas is a super-talented American television dancer and actress. She was born on February 2, 2002, in Portland, Oregon though she currently lives in Los Angeles, California. Soni became famous as a result of her role as Ramona Gibbler in 'Fuller House' a family TV series on Netflix. In 2013, she made her first breakthrough with a comedy Drama television series, 'Instant Mom.' She has also appeared in 'Beautiful and Twisted.'

Soni Nicole Bringas has her own YouTube channel 'Soniicole' with over 23K subscribers. She is currently occupied with her major role as Ramona Gobbler in 'Fuller House' and many choreography and dance videos. Her net worth income is around $550, 000 currently.

Soni Nicole Bringas was born on February 2, 2002, in Portland, Oregon. Her father is from Uruguay and her mother from Spain. She stayed in Costa Rica for one year when she was eight years old. She grew up as an outstanding dancer and actress which has landed her in some television commercials and various movies at quite an early age.

Soni Nicole Bringas started dancing at old age, beginning her dancing classes at only five and this made her perfect her inborn skills. She appeared in many prominent TV commercials still very young age, and when she got to be a teenager, she was an exceptional actor and worked in various businesses. During this time, she was also participating in dance challenges and competitions.

Her first appearance in the limelight was when she appeared in 'Jane the Virgin,' a CW series as a hip-hop dancer. She also played at the 'Dancing with the stars 2104' to promote 'Annie' a movie she was working on. She has been in commercials for leading brands like the 'Jordache commercial,' 'American girl' and 'The Swagger Wagon' Toyota commercial.
Initially, Soni Nicole Bringas became known through dancing. She has performed with many famous choreographers like Nick Demoura, Tricia Miranda, Matt Stefania, Wildabeast, Marty Kudelka and Nappytaps. Her passion for dance has made her learn many dancing styles including salsa, hip-hop, ballet, jazz, freestyle and much more.
Soni Nicole Bringas has also worked with quite some well-known celebrities in her many dance videos as well as while acting commercials. She has also performed with renowned artists like Missy Elliot, Christina Aguilera, Justin Beiber, Kimbra, Pitbull, Sharaya and many others.

Apart from dancing, Soni Nicole Bringas loves soccer and aerobics. She also practices martial arts and plays tennis during her free time. Besides English, Soni is familiar with Spanish and Catalan, which she can fluently speak. She loves to hang out with her friends and creating dance and music videos. Despite being in the limelight at an early age, she is modest and exceptionally humble.