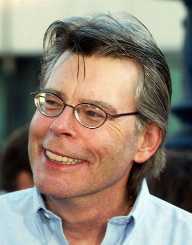 American author Stephen King was born on the 21 September 1947 in Portland, Maine. His parents were Donald King and Nellie Ruth Pillsbury. He was their second born child; they also had a son David. When Stephen King was young, his parents separated, and his mother raised her sons alone. His father, who was a merchant sailor, deserted his family and left without warning one day. Stephen King was brought up in Fort Wayne, Indiana and Stratford, Connecticut. Then when he was a pre-teen, his mother moved back to Durham, Maine to take care of her elderly parents and he spent the remainder of his childhood there.

Stephen King was a pupil at the local grammar school before moving to Lisbon Falls High School from where he graduated in 1966. He then enrolled at the University of Maine in Orono. While a university student, Stephen King wrote a weekly column in the campus newspaper, The Maine Campus. He was politically active as a student. In 1970 he graduated from the University of Maine with a B.A. in English.

Initially while looking for work as a teacher, Stephen King worked as a laborer in an industrial laundry. He also sold a short story here and here. His first short story The Glass Floor was sold to Startling Mystery Stories (1967). In late 1971, King started working at the Hampden Academy where he taught English. He continued with his writing, producing short stories and working on novels.

Stephen King had a breakthrough in 1973 when Doubleday & Co accepted his novel Carrie for publication. Stephen King began to work his second novel, Second Coming in mid-1973 and 1974, Carrie was published. His third novel, The Shining was written when he was living in Boulder, Colorado where he had for most of the year. He then returned to Maine, and it was here that he finished work on The Stand. By this time his literary career was established.

Stephen King spent three months in England in 1977 before purchasing a home in Center Lovell, Maine. He then moved to Orrington where he taught creative writing at the University of Maine, returning to Center Lovell in 1979.

Stephen King married Tabitha Spruce in early 1971. The couple had met at the University of Maine. They have three children: Naomi Rachel, Joe Hill and Owen Phillip and divide their time between Florida, Bangor and Center Lovell. Sons Joe and Owen are both authors, so is King’s wife, Tabitha.

During the 1980s Stephen King had issues with drugs and alcohol which he discusses in his memoir On Writing (2000). His friends and family intervened and persuaded him to seek help. He then quit all drugs and alcohol.

Stephen King is a generous philanthropist and donates millions each year to libraries, fire departments, families in need, clubs, schools and art organizations via The Stephen and Tabitha King Foundation.

Stephen King was born into the Methodist faith.

Stephen King is a baseball fan and a supporter of the Boston Red Sox. He attends games and sometimes mentions his team in his work.