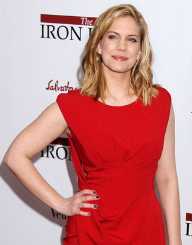 Anna Chlumsky was born on December 3, 1980, in Chicago, Illinois, USA. Her parents are Nancy and Frank Chlumsky. Sadly, her parents divorced when Anna was only a toddler. After that point, she was raised primarily by her mother.

As a young adult, Anna Chlumsky attended the University of Chicago. She later graduated from this school in 2002 with a degree in international studies. After earning her degree, Anna Chlumsky worked as a fact-checker for Zagat Survey for a short time before working at HarperCollins. However, she did not work at either of these jobs for long before returning to acting.

Anna Chlumsky began her acting career as a child star in 1989. She first appeared as just a bit character in the film Uncle Buck.

The most productive time of Chlumsky’s child-teen acting career was in the 1990’s. Her most memorable child-star role was as the character Vada Sultenfuss in the film My Girl in 1991, and in its sequel in 1994. Some of the other films she appeared in during this decade include Trading Mom and Gold Diggers: The Secret of Bear Mountain. Also, beginning in 1998, Anna Chlumsky began acting in bit parts in television shows, like Cupid and Early Edition.

From 1999-2004, Anna Chlumsky took a break from acting. During this time, she attended college.  She returned to the screen in 2007 in the film Blood Car. After this, she began appeared in both television shows and films. Her first recurring role on a television show was on Law & Order in 2007. She also had a recurring role on Cupid. Some of the films she appeared in during this decade include In the Loop, The Good Guy, and My Sweet Misery.

Throughout the 2010’s, Anna Chlumsky has primarily worked on made-for-television movies and television shows. Her most popular recurring role in a television show began in 2012 when she started playing the character Amy Brookheimer in Veep.

She later played Miriam Lass in Hannibal from 2013-2014. Most recently, she has appeared in Halt and Catch Fire in 2017 as the character Katie Herman. Some of the other projects she had worked on during this decade include White Color, The Pill, and Lights Out.

Throughout Anna Chlumsky’s long acting career, she has won almost a dozen awards and has been nominated for two dozen others. Some of her most impressive awards are listed below.

Anna Chlumsky married Shaun So in 2008. This couple has two children together: Penelope Joan and Clara Elizabeth So.