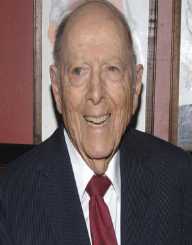 In 1915, Herman Wouk was born in Bronx, New York. His father, Abraham Isaac Wouk, was a Jewish immigrant from Russia. Like most Jewish children, he was taught the Talmud. Wouk graduated from The Townsend Harris High School with a diploma. He then enrolled at Columbia University. At 19 years, Herman graduated with a Bachelor of Arts. It was at the university that he started writing. He was the editor of Columbia Jester, the university’s magazine.

After graduating from Columbia University in 1934, Wouk did several jobs. At the advent of the WW 2, he supported the US government in selling war bonds. This he did by writing radio scripts in favor of the US treasury. When the Japanese attacked the American fleet in Pearl Harbor, Wouk decided to join the US Navy. He served in the Pacific until the war was over. In the navy, he rose to the rank of Executive Officer of the USS Zane. He was decorated with several military stars.

During the war, Wouk used his free time to write. Early in the morning, he would write few experiences he had seen. He then turned to write novels. Wouk sent the few chapters he had written to his former Professor at Columbia University. Professor Irwin Edman was impressed. He sent Wouk a writing contract in the war. The novel, Aurora Dawn, was completed and published after the war in 1947. The novel found its way to The Book of the Month Club main selection. Apart from writing on war, Wouk wrote about many other life issues. His novels ranged from his early life in the Bronx, war, Jewish traditions to fiction.

Herman Wouk kept a private diary of his life since 1937. He often used it as a reference in his works. In 2008, he was honored with the first Library of Congress Prize for American Fiction. It is at this ceremony that he formally presented his journals to the library. He agreed to the idea after an agreement was reached. The library agreed to have the entire journal scanned and kept in digital copies. In 2012, the private diary numbered over 100 volumes.

Wouk the great and deeply religious Man. His early childhood in New York was secular. But this later changed when his Grandfather Mendel Leib Levine came in from Minsk, Russia. It was under him that he studied the Jewish religion. His influence was to later change his religious devotions. He married Betty Sarah Brown in 1945. The couple met while serving in the military during the war. Sarah was originally a Protestant Christian. She later converted to Judaism. Sarah died in 2011. The couple had 3 children. The first was Abraham Isaac, born in 1946. He later died after drowning in 1951. The second was Nathaniel, born in 1950. He graduated from Princeton University. He is also an author. Joseph was born in 1954. He graduated from Columbia University. Joseph is a practicing lawyer, writer, and a film producer. He also served in the Israeli navy.

Herman Wouk has a collection of 24 published novels under his name.

Talent is beneficial only when enhanced with studies. From an early age, Wouk discovered his love for writing. He wrote about everything in his life. Even when at war, he kept his passion alive. With good researches, he went on to document accurate and well-loved novels. Age did not hinder his love for writing. To him, writing was his way of giving back to the society.