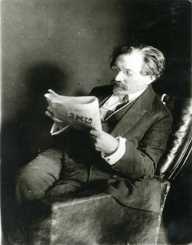 Sholem Aleichem was born on March 2nd, in 1859. He is an eminent essayist, playwright, and a novelist. He is a Yiddish individual who was ranked among the best Yiddish writers during the 19th and the 20th century. He is to be credited for massive contribution into the contemporary Yiddish literature. Most of his writings were under his pen name; Sholem Aleichem. One of his notable works was the Fiddler on the Roof which was a commercial success.

Sholem Aleichem was born on March 2nd in Pereyaslav in the Russian Empire which is modern-day Ukraine. Aleichem’s parents were in the timber business and that this made them wealthy in the society. His father was called Menachem-Nukhem Rabinovich while his mother was named Chaye-Esther. While he was still young, his family opted to expand their business to Voronkovx. Nonetheless, things did not work out as expected and therefore the family had to relocate back to his place of birth.

Tragedy hit Aleichem’s family again and this time round his mother passed away. She succumbed to cholera leading to her early death. During this time, Aleichem was only 13 years. By the time he clocked 15 years, he had made up his mind to venture into a writing career.

After completing his high school education from a local secondary school, he went on to become a private teacher to Olga-Hodel for about three years.

Immediately after completing his work as a private tutor, in 1879 Sholem Aleichem took the job of a local reporter. He was to work with a Hebrew weekly paper called ‘Ha-Tsefirah.’ This gave him an opportunity to publish his articles more so in 1881 and 1882.

Right from the beginning, he wanted to write in Hebrew or Russian language. Nonetheless, he chose to stick to the Yiddish language because it was convenient for his large Jewish audience.

After a few years, in 1883, Aleichem managed to release his debut novel titled Tsvey shteyne which means Two Gravestones. It was at this time that he chose to use the name ‘Sholem Aleichem’ as his pen name. This was a Yiddish name meaning ‘peace be upon you.’ Other works soon followed including A Correspondence between Two Old Friends – 1884 and Office Business – 1885. Some of the fictional works that he published include Natasha, Sender Blank un-zany gezindi – Sender Blank and his Family, and Yosele Solovey - Yosele the Nightingale.

1890s was somehow difficult for him as he faced numerous financial difficulties. This also had a negative impact on his writing career as his productivity went down. A single novel named Meshiekhs tsaytn - The Days of the Redeemer was released during this entire period.

It took nine years before things began to turn bright for Aleichem and his writing career. In 1899, he released a Yiddish publication titled Der yud. This made things better for him as he began making money from his literary work. This was followed by other works which went on to become his greatest writings.

Sholem Aleichem’s most impressive work was called Stempenyu. This work was written in 1888. This work was based on a love story between a religious woman and a musician. During the 19th century, some of his notable characters in his stories were the likes of Tevye and Menakhem Mendl. His other outstanding work was the 1901 publication under the title Dos tepl – The Pot.

Sholem Aleichem wedded Olga Loev in 1883. Loev was from a rich family, and together the two migrated to Belaia Tserkov. They were blessed with six children.

Sholem Aleichem died on May 13th in 1916. He died as a result of tuberculosis that he had been suffering from.