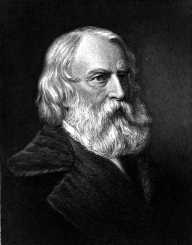 Henry Wadsworth Longfellow was born on February 27, 1807, in Portland, Maine, Massachusetts. His father Stephen Longfellow was a lawyer, and his grandfather Peleg used to be a general in the American Revolutionary War and later became a Member of Congress. Longfellow was the second child of his parents, who had eight children together.

Longfellow began his education at three years of age when he started attending a dame school. Three years later, he was enrolled in the Portland Academy. His mother encouraged the young boy to read, and he soon earned a reputation of being very serious.

Henry Longfellow began writing poems while he was still a student at Portland Academy. He published his first poem “The Battle of Lovell’s Pond” in 1820 in the Portland Gazette. Since then, he continued to submit his poetry to various newspapers and magazines. One of the biggest influences for Longfellow was his professor Thomas Cogswell Upham. His professor encouraged Longfellow to publish, and in one year since 1824, he managed to release 40 poems.

Henry Longfellow graduated from Bowdoin College in 1825 and soon after got a job as a professor of modern languages there. However, firstly Longfellow had to learn the languages. One of the versions of how he got the job, was that one of his trustees, Benjamin Orr was impressed by his translation of Horace from Latin that he did.

In 1826, Longfellow embarked on a journey to Europe on the board of ship Cadmus. During the next three years, Longfellow traveled to Spain, France, Italy, Germany, and England. His father sponsored the trip and cost him a considerable amount of money for the time- $2, 604. Despite the expenses, Longfellow learned French, Spanish, Portuguese and German languages.

Upon his return to the United States, Henry Longfellow wrote to Bowdoin that he does not want to accept the position as a professor due to the low salary. However, the trustees agreed to raise his pay from $600 to $800 and for additional $100 give him the duties of college librarian. Longfellow accepted the offer and began working at his alma mater.

Besides his teaching work, Longfellow also translated textbooks in French, Italian and Spanish. One of his first translated poetry books was from the medieval Spanish poet Jorge Manrique. The book was published in 1833. His next published project was a travel book Outre-Mer: A Pilgrimage Beyond the Sea. He was being considered for a position at the New York University as a professor; however, since the university was in developmental stages, there was no salary.

Although highly paid, Henry Longfellow did not enjoy his work. His luck changed in 1834 when he was offered the Smith Professorship of Modern Languages by the president of Harvard College Josiah Quincy III. For the position, Longfellow was asked to travel Europe once again, where he improved his German and learned Dutch, Danish, Swedish, Finnish and Icelandic.

During this time, Longfellow was married to Marie Storer Potter. At the time of the trip, she was pregnant, but had a miscarriage in her sixth month of pregnancy, and soon after she died, being 22 years old. Three years after her death, Longfellow wrote a poem dedicated to her- “Footsteps of Angels”.

In 1836, Henry Longfellow returned to the United States and began working at Harvard. He continued to write poetry and published his debut book in 1839, titled Voices of the Night. For the most part, the book was translations of works from other authors, but also included nine original poems. Just two years later, he published his second book Ballads and Other Poems.

While on a trip to Switzerland, Longfellow met the Boston industrialist Nathan Appleton and fell for his daughter Frances. The independent young lady was not interested in marriage, but Longfellow was determined to marry her. She was finally convinced only seven years later and wrote a letter to him agreeing to the wedding.

During his courtship, Henry Longfellow wrote the prose book Hyperion, published in 1839 and the play The Spanish Student, published in 1842. During the seven years of courtship, Longfellow was struggling with depression and panic attacks, and at one point took a six-month leave of absence from Harvard. In 1842, Longfellow also published Poems of Slavery, in which he publicly supported abolitionism.

After marrying Frances in 1843, Henry Longfellow wrote his only love poem, the sonnet “The Evening Star.” The couple had six children together. His career was going well, and Longfellow was loved by his students and successful with his poetry. By 1850, his income from poetry brought around $1,900 a year. In 1854, Longfellow retired from Harvard. A few years later, he was awarded an honorary doctorate of laws in 1859.

In 1861, Henry Longfellow suffered a significant personal loss, when his wife suddenly died. She was closing an envelope with hot wax sealing, and her dress caught on fire. Frances was severely burned and died the following day. While trying to save his wife, Longfellow also acquired terrible burns and could not attend her funeral. He also stopped shaving due to the severe burns to his face. Longfellow was severely devastated by the death of his wife and worried that he would be sent to an insane asylum.

One of his major works after retirement was the translation of Dante Alighieri’s Divine Comedy, which took him several years to perfect. To work on the translation, he organized weekly meetings with other intellectuals, called The Dante Club. In 1874, Longfellow published “The Hanging of the Crane” in New York Ledger, and received $3,000 for it- the highest price ever paid for a poem.

In 1882, Henry Longfellow began to feel stomach pain and took some opium to relieve it, before going to bed. His pain continued for several days, and finally, Longfellow died on March 24, 1882. He was buried at the Mount Auburn Cemetery in Cambridge, together with both of his wives. The following year, a collection of his works was published.