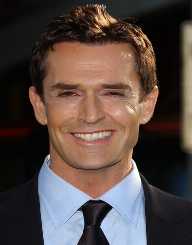 Rupert James Hector Everett is an English actor and author. Born on May 29, 1959, he first came to limelight as a cast in Julian Mitchell play in 1981. His role in the film Another Country, 1984 as a known homosexual student in an English public earned him a BAFTA Award nomination. Everett has played roles in several films and television production.

Rupert Everett received Golden Globe and BAFTA Award nominations for his stunning role in My Best Friend’s Wedding in 1997. His films include The Madness of King George, 1994, Inspector Gadget, 1999, A Midsummer Night’s Dream, 1999 and Stardust in 2007.

Rupert Everett was born on May 29, 1959, in Burnham Deepdale, Norfolk. He was born to Sara (née Maclean) and Major Anthony Michael Everett, who served in the British Army. Brought up as a Roman Catholic, he was an English, Scottish, Irish, Dutch, and German ancestry.

Rupert Everett received education at Farleigh School in Andover, Hampshire from age seven and later by Benedictine monks at Ampleforth College in Yorkshire. Attracted to acting and singing, he dropped out from school and left home to London at age 16. While in London, Everett worked as a prostitute to earn a living and to satisfy his drugs need.

He enrolled at the Central School of Speech and Drama (now University of London) but was sacked at the second year for misbehavior. He then left for Scotland where he worked at the Citizen Theatre in Glasgow where he also played roles in several stage productions.

Rupert Everett had a stage career breakthrough at the Greenwich Theatre in 1981 and the West End production of Another Country in 1982. After that impressive performance, he received a debut film role in A Shocking Accident in 1982 and reprisedhis role in the film version of Another Country in 1984. The successes that followed gained him the tag as one of the hottest rising stars in Britain. He showed up strongly in his role in Dance with a Stranger in 1985 only to witness his first film flop with Hearts of Fire, 1987 co-starring Bob Dylan. This caused his reputation to dip throughout the late 1980 and early 1990s. He also disclosed his sexual orientation as being a gay, defying all the consequences that came with it. During this period, he released the album Generation of Loneliness.

Rupert Everett s career began to rise again playing a supporting role in The Madness of King George and Prêt-á-Porter (Ready to Wear) in 1994.

In 1997, he appeared in My Best Friend’s Wedding, playing a gay friend of actor Julia Robert’s character. The film became a huge success, restoring Everett’s reputation in the film industry.

Rupert Everett followed the success with roles in Shakespeare in Love, 1998 and the comedy An Ideal Husband, 1999 co-starring Julianne Moore, Jeremy Northam, Minnie Drive, and Cate Blanchett. In 2000, Everett featured in The Next Thing and made a Broadway debut at the Shubert Theatre in 2009. He featured in Noel Coward play, Blithe Spirit, starring Christine Ebersole, Angela Lansbury, and Jayne Atkinson.

Aside from acting, Rupert Everett is also an author and has a couple of books in his credit. He wrote the bestseller semi-autobiography, Hello, Darling, Are You Working? while in Paris in 1991.

He has served as a contributing editor of Vanity Fair and a writer for The Guardian. He published the memoir, Red Carpets and Other Banana Skins, in 2006, revealing in it his six-year relationship with British TV presenter Paula Yates. He starred in the stage play, The Judas Kiss, which won him the WhatsOnStage Award for Best Actor in a Play.

Rupert Everett played a recurring role of Dr. Hendricks in the BBC2 comedy Quacks in 2017. His most recent work is the film The Happy Prince, 2018, which he wrote and directed

Rupert Everett is a known gay. He owns a home in West London district of Belgravia, which he purchased in 2008.