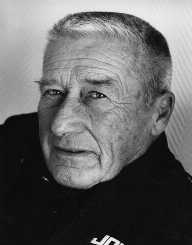 American crime writer Mickey Spillane was born Frank Morrison Spillane on the 9 March 1918 in Brooklyn, New York. His father was an Irish-Catholic, and his mother was Scottish Presbyterian.

After high school, Mickey Spillane studied law for a short time in Kanas.

Mickey Spillane was still in high school when he began submitting writing to the Elizabeth Daily Journal (1932). He progressed to writing for various magazines, newspapers, and comics.

He left school during the Great Depression and did various menial jobs to make money. He also worked as a lifeguard. Funnies Inc., a publisher of comic books, offered him a job as an assistant editor and he thrived in the environment. Comics he wrote for included Captain Marvel, The Human Touch, and Bull’s Eye Bill.

Upon his return from World War II, Mickey Spillane was involved in the establishment of a comic book factory in Brooklyn, New York. His first novel, I, The Jury was published by EP Dutton & Co. The paperback of I, The Jury (1947) sold over two million copies.

Mickey Spillane wrote the Tiger Mann series consisting of four books published between 1964 and 1966 and many other crime novels. After Spillane’s death in 2006, his literary executive Max Collins undertook to edit and complete Spillane’s unpublished manuscripts.

Mickey Spillane sold more than 180 million books, he is the 5th most translated author, and seven of his books were on the list of the 20th century’s 25 bestselling fiction titles. Spillane appeared as Mike Hammer in a number of his books which were adapted to film in the UK. In the late 1970s, he wrote his first children’s book The Day The Sea Rolled Back. Spillane’s final novel was Black Alley (1996).

In 1995, Mickey Spillane was presented with an Edgar Allen Poe Grand Master Award.

When World War II broke out, and after the bombing of Pearl Harbour, Mickey Spillane joined the U.S. Air Force (1941) and was sent to bases in Florida and Mississippi as a fighter pilot instructor.

At the end of the conflict, he was discharged from the U.S. Air Force with the rank of captain. Mickey Spillane married Mary Ann Pearce in 1945. After obtaining an advance from his first novel, he bought land in upstate New York and build a house. In the 1950s, Spillane purchased a home at Murrell’s Inlet on the Atlantic coast of South Caroline.

He had four children with Pearce: Caroline, Kathy, Michael, and Ward. In 1962, the couple divorced, and he married Sherri Malinou (m.1964-div.1983). After his divorce from Malinou, he married Jane Johnson in 1983. Hurricane Hugo destroyed the Murrell's Inlet house in 1989 and Spillane rebuilt it, continuing to live in it until his death. Mickey Spillane died of pancreatic cancer on the 17 July 2006.

Mickey Spillane became a Jehovah’s Witness as an adult.