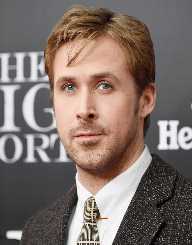 Canadian actor and musician Ryan Gosling was born on the 12 November 1980 in London, Ontario, Canada. He was raised in a Mormon family. When he was growing up, the family lived in Cornwall, Ontario and Burlington, Ontario.

Ryan Gosling attended various schools before it was realized that he had Attention Deficit Hyperactivity Disorder and his mother then homeschooled him. For his high schooling, he enrolled at Lester B Pearson High School but left at 17 without graduating.

Ryan Gosling song Put Me in the Car appeared on the internet as a download in 2007, and at the same time, he joined a rock band, Dead Man’s Bones. They released an album in 2009 and also toured later in the year.

Ryan Gosling has been nominated for numerous awards. Awards he has won include the 2001 Russian Guild of Film Critics Best Foreign Actor award for The Believer. In 2005 he was nominated for the Best Actor Oscar in for his role in Half Nelson (2006). He also won the San Diego Film Critics Society: Best Comedic Performance Award in 2016 for The Nice Guys, a 2016 Golden Globe Best Actor for La La Land