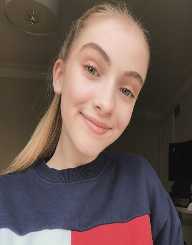 YouTube personality and entertainer Lauren Orlando was born on November 6, 2004. She is the daughter of Dale Orlando and Meredith Orlando and is the youngest amongst four children. All her three siblings are in the entertainment world. The most famous kid of the lot is American freestyle and dance-pop singer Johnny Orlando. Lauren and Johnny's sisters Darian Orlando and Maddie Orlando have also gained a little bit of name and fame in the entertainment industry. Though Lauren was born in Oakville, Ontario, Canada, the Orlando family shifted base to Los Angeles, the USA in the year 2015. This made it possible for Lauren to explore the music and film industries in a better way.

Lauren Orlando began her sojourn in the entertainment world at the tender of age of seven. She started appearing in her brother Johnny's YouTube videos, and the audiences noticed her little acts. Later, in March 2013, Lauren launched her own YouTube channel by the name 'LaurenLogs.' She started vlogging and posted her vlogs on her channel. By the end of the year 2016, Lauren became one of the famous internet personalities with over 3,40,000 subscribers on her YouTube channel itself.

Most of the videos posted by Lauren Orlando features skits or challenges. The little girl exceptionally well executes the challenges and this perfection is the reason she receives an average of more than 50k views on each of her videos. All her vlogs have won great appreciation from audiences of all age groups. Her most famous videos are the ‘Say Anything Challenge’ and the ‘Wet Head Challenge.’

Lauren Orlando also collaborated with fellow vlogger Hayden Summerall for the 'Tin Can Challenge’ video. The video was released in April 2015. In 2014, the audience was able to view a snippet of an Austin Mahone concert through a video posted by Lauren. She is a big fan of the singer-songwriter and had attended the Austin Mahone concert in Toronto.

Lauren Orlando's highly successful brother Johnny Orlando appears in most of her videos and vice versa. Even her sister Darian is involved in the video-making process. Darian makes and edits almost all the videos posted by Lauren.

Lauren Orlando is currently studying in a special school in Los Angeles. Her brother Johnny is in the same school too as the school is for children working in the entertainment industry.  Lauren's family is extremely supportive of her career choice, and she considers her siblings to be her greatest strength. Apart from being an internet personality and a social media star, Lauren wishes to be a model when she grows up. She enjoys dancing, singing and also loves to play sports especially hockey.

Lauren Orlando is a creative person and loves to do things that involve creativity; be it acting, photography, drawing, dancing, etc. She is a dog-lover and plans to have ten dogs at her home when she grows up. However, the young star finds it tough to interact with her fans and is working hard on her communication skills. She has not dated anyone to date and is currently single.