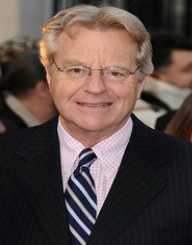 Jerry Springer was born on February 13, 1944. He is an American television presenter. He is popularly known as a television host in ‘The Jerry Springer Show.’ He has hosted the show since it debuted in 1991. He is the former mayor of Cincinnati, Ohio. He also served on the Cincinnati City Council for five terms. ‘The Jerry Springer Show’ came to him with a lot of hard work and his experience in the political field. Jerry may have been born in the UK, but he has made a name in the United States. Jerry is a Democrat in the US.

Gerald Norman ‘Jerry’ Springer was born on February 13, 1944, in Highgate Tube Station in London. He was born to Margot and Richard Springer. His mother was a bank clerk while his father owned a shoe shop. In 1949, his family immigrated to America. They started living in Queens, New York. Jerry attended Tulane University in New Orleans, Louisiana where he pursued Bachelor of Arts and majored in political science. In 1968, Jerry graduated from the Northwestern University with a Juris Doctor Degree. From 1973-1985 Jerry worked in the law firm Drinker, Sudman, and Springer.

While practicing law, Jerry Springer met Robert Kennedy during a social event. He became the political campaign advisor for Kennedy before his assassination. After his murder, Jerry joined the law firm Frost and Jacobs in Cincinnati. Jerry was the leader of the movement to lower the voting age from 21 years to 18 years which led to his Senate Judiciary Committee testimony supporting ratification of the 26th Amendment of the US Constitution.

In 1970, Jerry Springer contested for Congress in Ohio but lost to Republican Donald Clancy. In 1971, he was elected to the Cincinnati City Council. In 1974, he resigned from the Cincinnati City Council. In 1977, he was elected as the mayor of Cincinnati, and he served for one year. In 1982, he contested for the position of governor of Ohio which he lost. He, later on, became the political reporter and commentator of WLWT an NBC affiliate.

By 1984, Jerry Springer became the number one news anchor in Cincinnati. He won ten local Emmys for his nightly commentaries. In 1991, ‘The Jerry Springer Show’ aired. The show addressed gun politics and homelessness. In 1994, the show was given a new look as it addressed tabloid sensationalized topics. This new look made the show more popular to the public. Between 2000 to 2001 Jerry hosted ‘Late Night with Jerry Springer’ and ‘Greed’ which were UK versions.

In 2005, ‘The Springer Show’ was launched. The show was a British version of ‘The Jerry Springer Show.’ Jerry Springer also hosted ‘Springer on the Radio’ in the same year. Jerry hosted Miss Universe 2008. He also guests hosted for WWE Raw at Wells Fargo Arena and hosted ‘Baggage’ as well which was a dating game show.

In 2001, Jerry Springer won the Golden Apple Awards. In 1999, he won the Razzie Awards in the category of ‘Worst New Star’ for Ringmaster (1998). Jerry’s famous work of his life is ‘The Jerry Springer Show’ which has been on the air since 1991. Jerry is also the executive producer of ‘The Steve Wilkos Show.’

In 1973, Jerry Springer married Micki Velton, and they are still married to date. In 1976, they got their daughter, Katie Springer. Jerry loves to keep his private life private from the public eyes. He is a Yankee fan. Jerry is usually called upon as a speaker in many American colleges and universities to offer inspirational speeches to the students.