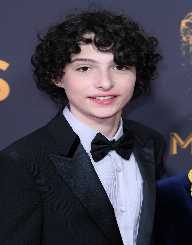 Finn Wolfhard was born in 2002, in Vancouver, in Canada. His family has roots in France, Germany, and is of Jewish descent. Wolfhard’s father is a researcher, who focuses on aboriginal land claims; apart from that, he is also a screenwriter. Finn has a brother Nick. Nick Wolfhard is currently working as a voice actor.

Finn started studying in 2016 in a Vancouver. He attends a Catholic school there.

Finn Wolfhard encountered his first inspiration for an acting career before the age of ten. It was after watching the movie “Spider-Man,” when he knew at such a young age, that he would become an actor.

The first job as an actor Finn found on “Craigslist.” His debut on television was in a show “The 100”, where he played Zoran, and later he was cast for the “Supernatural” as Jordie Pinsky. These roles are noteworthy and led to his success and helped him get recognized in the industry.

Finn’s most significant career step so far is starring in a Netflix series called “Stranger Things.” Wolfhard plays the main character in the series, a role of Mike Wheeler. The way to the position was quite extraordinary though. Wolfhard noticed a casting call online and applied for the part with a video audition.

The most extraordinary thing in this application was that he recorded the video while he had a cold, and was bed bound for a couple of days. He got the leading role nevertheless.

Being the lead actor in Stranger Things won Finn Wolfhard a SAG award for Outstanding Performance in a Drama Series at the beginning of 2017. The abbreviation “SAG” stands for Screen Actors Guild Awards.

Finn Wolfhard has participated in several other movies and series. The first ones were in 2013 when he was only eleven years old. He played a role of Young Charles in a movie “Aftermath” and a part of the movie “The Resurrection.” Wolfhard played a role of Richie Tozier in a Stephen King movie “It.” The movie is not yet released but is expected to be released in September of 2017.

Finn Wolfhard has appeared not only in television series and movies but has also participated in the filming of several music videos. His first appearance in a music video was in 2012, at the age of 10. He appeared in “Retro Oceans” by the band Facts. Two years later, in 2014 he appeared in a music video for the band PUP, and their song “Guilt Trip.”

Their cooperation was quite fruitful, as PUP invited Wolfhard to film in another music video two years later, in 2016. Then he appeared as Young Stefan Babcock in the video for “Sleep In The Heat.”

In his leisure time

When Finn Wolfhard is not in school or at work filming for another role, he enjoys playing bass and guitar. He describes himself as outdoorsy and easy-going and likes sports. He has once admitted in an interview during the filming of “If,” that he has a fear of clowns.