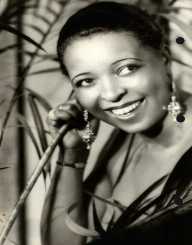 Ethel Waters was born on October 31, 1896. She was born in Chester, Pennsylvania.  A consummate professional in the arts, Ethel Waters, was a film/ television /theatre actress, and jazz singer.

Born of rape, Ethel Waters had a hard childhood because she was a product of rape, her mother sent her to live with her grandmother. She moved every 15 months due to work issues and the fact that she lived in poverty.

At age thirteen, Ethel Waters got married and divorced from the same man in 1913 because her then-husband was abusive.  She later married again.

On her 17th birthday, Ethel Waters performed a song at a costume birthday party and ended up being offered a singing job at the Lincoln Theatre in Baltimore. After she left the theatre to travel and tour with the Black Vaudeville circuit. Then she joined a carnival that used freight cars to travel from venue to venue until she got to Chicago.

Following her stint on the carnival, she moved to Atlanta and sang at a club.  She then moved to Harlem in 1919 and became well-known during the Harlem Renaissance.

Her career took off in the 1920’s.  Her first job in Harlem was at the Edmunds Cellar.  In the year 1919, she acted in Hello; a black-faced comedy.

Ethel Waters recorded approximately 250 songs total in her career between the years of 1920 to 1960.   A woman of firsts, she issued being the first black to record an album but became the fifth to do it at Cardinal Records.

She jumps from record company to record company.  After Cardinal, she moved to Black Swan records. While there she sang with Fletcher Henderson from 1921-1923.  During this time, she was the highest paid recording artist. But in 1924, Paramount bought Black Swan Records. The following year, Waters left the label.

It was at this tie that silent movies came out. Southee Waters performed with Earl Dancer and the Keith Vaudeville circuit for “whites only” audiences to listen to her while they watched their silent movie show.

While making live performances she recorded more singles and music. In 1926, she recorded, “I’m Coming Virginia”; then came her signature song.  Entitled “Am I Blue?” she and Pearl Wright arranged the song for which she would become well known and earned her a Grammy Hall of Fame award.

Although considered a blues singer prior to 1925 her career took a turn to more Broadway tunes and shows.  She participated in many plays and television shows in which she sang. She recorded with multiple record companies, two of which were Columbia and Decca Records.  Here follows a list of some of her hit singled off of her records:

Ethel Waters also acted in a lot of films as well.  Here is a list of some of the film productions:

Ethel Waters was involved with several men over the years and one woman. Her first marriage ended in divorce as he beat her. Following that marriage, she was involved with a woman, Ethel Williams who was a swimmer.  That was during the 1920’s. Her second married was to Clyde Edwards Mathers in 1929. That union did not produce any children and ended in 1933.

The third husband was Edward Mallory whom she married in 1938.  And that marriage lasted until the divorced in 1945. Despite not being married and having no natural children she did adopt her goddaughter.

Ethel Waters died in 1977 after fighting a battle with cancer, kidney failure, and other ailments.