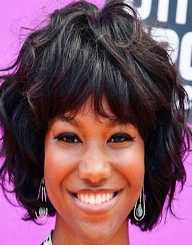 Riele West Downs is rising Canadian-American actress and social media star. Born on July 08, 2001 she is best known for her role as Charlotte Bolton in the Nickelodeon sitcom, Henry Danger. Riele is a natural actress with flair and impeccable acting skills which easily attracts attention. As a child actor, she made a film debut at age four and made a television appearance in A Russell Peters Christmas special in 2011. She has since starred in movies like The Best Man Holiday, Ruby Skype P.I The Maltese Puppy and the Gabby Douglas Story.

Riele Downs aside from being a famous actress has also taken social media by storm. She posts new contents that portray her acting skills and has gained applause for that. Some of her videos especially those on Musically.ly feature her sister and other co-stars. She is on Instagram with over 915,000 followers and 48.700 followers on Twitter. Her Musically.ly has the most fans with over 1.1 million people who follow her posts.

Riele Downs was born on July 08, 2001 in Toronto, Canada to mother, Elle Downs. She has an elder sister called Reiya Downs who is also an actress and features in the Netflix sitcom, Degrassi. Riele’s biological father is not known, and she has not talked to him. Raile academically good and has been able to blend her acting and studies very well. With education being and acting career being her prime motive, she is focused on that and is not dating currently. Reile refuted claims that she was dating co-actor Jace Norman and in an interview disclosed that she has no time for a relationship now.

Just like her mother and elder sister, Riele Downs took on acting when she was young. She made an acting debut at age four where she played a small role in the movie Four Brothers. Her next appearance on the screen was during the television show A Russell Peters Christmas Special in 2011. However, Reile gained recognition in the film, The Best Man Holiday in 2013 and followed up with her incredible display in The Gabby Douglas Story.

Riele Downs finally came to fame with her role in the Nickelodeon show Henry Danger in 2014. Reile’s popularity in acting also gained her fame on social media. With her stunning video and picture posts, she has got many followers, especially on Musically.ly where she has over 1 million fans. Her followers on Instagram and Twitter is also massive.