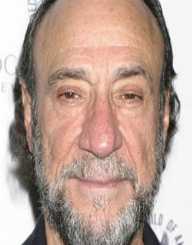 American actor F. Murray Abraham was born Murray Abraham on the 24 October 1939 in Pittsburgh, Pennsylvania to Josephine Stello and Frederick Abraham. His father’s family were from Syria, and his mother was of Italian ancestry. He was raised in El Paso, Texas.

After graduating from high school, F. Murray Abraham enrolled at the University of Texas where he studied drama.

F. Murray Abraham relocated to Los Angeles and made his first stage appearance in The Wonderful Ice Cream Suit (1965). He then moved across to New York City and made his off-Broadway debut in The Fantasticks (1966). His Broadway debut was The Man in the Glass Booth (1966).

Continuing with his stage work, F. Murray Abraham also began acting on television and in films. His film debut was in They Might Be Giants (1971), and he had an uncredited role in Serpico (1973). He went on to act in The Prisoner of Second Avenue (1975) as a taxi driver and in The Sunshine Boys (1975) as a car mechanic. In 1976, he played Paul Leeper in All The President’s Me, Chris in a film adaptation of The Ritz (1976) and Eppis in The Big Fix (1978).

F. Murray Abraham was inducted into the American Theatre Hall of Fame in 2015.  He is the recipient of many awards and nominations including a 2011 Obie Award for his performance on stage in The Merchant of Venice. For Amadeus (1984) he won the Academy Award for Best Actor, a Golden Globe, the 1985 Albert Schweitzer Award for Classic Film Acting and a BAFTA nomination.

In 2015, he was nominated for the Screen Actors Guild for Outstanding Performance by a Cast in a Motion Picture for The Grand Budapest Hotel. Italy recognised Abraham by presenting him with the Premio per gli Italiani nel Mondo prize which is awarded by the Italian government and the Marzio Tremaglia Foundation to distinguished members of the Italian diaspora. Abraham also won The Gielgud Award in 2010. For his portrayal of Dar Adal in Homeland, he has twice been nominated for a Primetime Emmy Award for Outstanding Actor in a Drama Series (2015 and 2018).