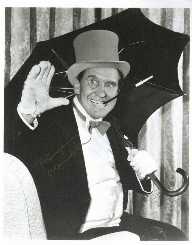 American actor Burgess Meredith was born on the 16 November 1907 to Ida Beth and William George Meredith in Cleveland, Ohio.

In 1926 Burgess Meredith graduated from Hoosac School and then enrolled at Amherst College in Massachusetts (1927-1931).

After leaving college, Burgess Meredith did various jobs including a stint as a journalist on the Stamford Advocate, working on Wall Street and for a time he was a merchant marine. He also joined Ea Le Gallienne stage company in New York City and 1933 made his stage debut. His screen debut was in Winterset (1936), and he also appeared in Winterset on Broadway. During World War II (1939-1945) Meredith served in the U.S. Army (1942-1945) and held the rank of captain upon discharge.

During seven decades of acting, Burgess Meredith appeared in dozens of films and various television series. He was most famous for his portrayal of Mickey, the boxing trainer, in the Rocky movies.

Earlier work included Of Mice and Men (1939) an adaptation of the John Steinbeck novel, Batman (1966) where he portrayed the Penguins, Day of the Locust (1975), Tail Gunner Joe (1977), Grumpy Old Men (1993) and the sequel Grumpier Old Men (1995). He also did voice-over roles in various television commercials including the Skippy peanut butter commercials.

In 1976 Burgess Meredith received a best supporting actor Academy Award nomination for his performance in Day of the Locust (1975) and 1977 was again nominated for Rocky (1976). He won a Primetime Emmy Outstanding Performance by a Support Actor in a Comedy or Drama Special in 1977 for Tail Gunner Joe (1977). Meredith won the Academy of Science Fiction, Fantasy & Horror Films, USA Saturn Award for Best Supporting Actor twice. The first time he won the Saturn Award was in 1979 for Magic (1978) and the second time in 1982 for Clash of the Titans (1981).

Meredith received a star on the Hollywood Walk of Fame in 1987.

Burgess Meredith suffered from violent mood swings were diagnosed as cyclothymia. Late in life, he had Alzheimer’s Disease.

Burgess Meredith was married four times. His first wife was Helen Derby Berrien (m.1932-div,1935). He was then married to Margaret Perry between 1936-1938 and Paulette Goddard between 1944-1949. His fourth marriage to Kaja Sundsten lasted from January 1951 until Meredith’s death in 1997. He had two children with Sundsten.

Meredith was an environmentalist as well as a political activist who opposed the war in Vietnam.

His autobiography: So Far, So Good was published in 1994.

Burgess Meredith died on the 9 September 1997.