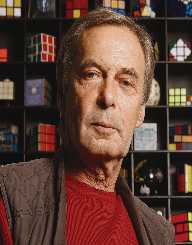 Erno Rubik has a name that is famous around the world. The inventor of Rubik's Cube has created many puzzles and games for all ages.

Erno Rubik was born on July 13, 1944, in Budapest, Hungary. His father Erno was a flight engineer while his mother Magdolna was a poet. His father, whom Rubik credits for his inspiration, was well known around the world for his skills regarding gliders.

Erno Rubik attended the Secondary School of Fine and Applied Arts from 1958 to 1962. He focused his studies on sculpture. After that, he attended the Budapest University of Technology until 1967.

While there, he was one of the faculty members of the architecture department. From 1967 to 1971, Rubik attended the Hungarian Academy of Applied Arts. During that time he was on the Faculty of Interior Architecture and Design.

During the 1970s, Erno Rubik was the professor of architecture at the Budapest College of Applied Arts. As a professor, he challenged his students.  In 1974, he demonstrated this by making a prototype of a solid cube that could twist and turn and not fall apart. The object of this “magic cube” was to rearrange the pieces and put it back together again in which all of the painted sides matched. The teacher had to figure out how to solve his problem.

After making the cube by hand and making it sturdy, it took Erno Rubik a month to solve his cube. That cube was originally a learning tool in the study of spatial relationships. By 1975, he had the “Magic Cube” patented as a toy. Sales were good in Hungary, but he was able to give it more success. Mathematicians took these cubes to international conferences. One entrepreneur took it to the Nuremberg Toy Fair in 1979.

It was not easy to sell the idea to toy companies, but Tom Kremer was able to sell the concept to Ideal Toy Company. The name changed to Rubik's Cube, and it became a worldwide success in the 1980s. It won awards like Toy of the Year in multiple countries. The International Rubik's Championship was held in 1982 and encouraged the sport of Speedcubing. The Museum of Modern Art in New York put the cube in its permanent collection.

The concept of the Rubik's Cube has changed little over time, but in 2013 it was redesigned to be faster and more durable. While Rubik's Cube was gaining success across the world, the game and puzzle magazines called “...And Games” hired him to be the editor of the publication. Later Erno Rubik established his own company called the Rubik Studio.

Erno Rubik designed and created items from games and video games to furniture and art. All the while, he continued to teach at the college. In 1990, Rubik became the President of the Hungarian Engineering Academy. Rubik's Cube was not his only invention.  He made other toys such as Rubik's Magic, Rubik's Magic:  Master Edition, Rubik's Snake, Rubik's Tangle, and Rubik's 360.

Erno Rubik continues to promote engineers, architects, and designers. He has worked on the international STEM-based exhibit called “Beyond Rubik's Cube.” He also gives lectures and may attend some of the speedcubing competitions.

Long before STEM (Science, Technology, Engineering, and Mathematics) became a 21-century focus in education, Rubik promoted problem-solving in a fun way. The Rubik's Cube is an iconic symbol of the 1980s and has proved itself to be more than a passing trend.

Erno Rubik established the International Rubik Foundation. The purpose of the organization is to support the engineers and architects who display talent in future endeavors.

European Union Ambassador of the Year of Creativity and Innovation, 2009

The Hungarian Order of Merit Commanders Cross of the Star, 2010

Grand Cross of the Order of Saint Stephen, 2014