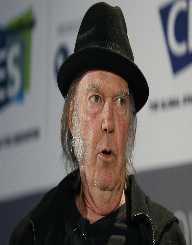 Neil Percival Young is a Canadian singer, songwriter, and musician. A guitarist par excellence he is considered to be one of the greatest exponents of Rock music genre. He is also a producer, director, and screenwriter. A generation of music lovers was enthralled with his distinctive style of rock music and imaginative songwriting.

Neil Percival Young was born on November 12, 1945, in Toronto, Ontario, Canada. His father, Scott Alexander Young, was a sports journalist. His mother Edna Blow Ragland “Rassy,” Young with American and French ancestry, was an essential member of the ‘Daughters of the American Revolution.’ Robert ‘Bob’ Young was his elder brother.

In his early years, he was diagnosed with Type I Diabetes and also suffered an attack of Polio as early as in 1951. But he ultimately recovered from these ailments within a short span of time. After the recovery, Neil went to Florida along with his family for vacation. During the vacation period, he briefly attended Chisholm Elementary School in New Smyrna Beach, Florida.

In 1952, they returned to Canada, and after residing in different places for short periods, his family finally settled in North Toronto. Neil Young’s love affair with music started taking shape at this stage. The prevalent popular music commonly aired on radio stations during those days greatly attracted him to the world of music.

Neil’s father was continuously involved in several extramarital affairs. Consequently, his father abandoned his mother when Neil was just 12 years old. Upon his mother’s insistence, the couple officially divorced in 1960. After that Neil relocated to Winnipeg accompanying his mother while his elder brother stayed with their father in Toronto.

In Winnipeg, Neil Young formed his first band ‘The Jades,’ while studying at Earl Grey Junior High School. In 1963, he formed his first stable band ‘The Squires’. The band was formed during his student life at the Kelvin High School. He started performing at Fort William with his band after leaving school. During one such performance, he met Stephen Stills, a member of folk-rock band. This chance meeting turned into a major collaboration in his later years.

Neil Young left his band ‘The Squires’ in the mid-1960s. Collaborating with a Winnipeg band ‘The Guess Who,’ he recorded his first popular song ‘Flying On The Ground is Wrong.’ He also met Joni Mitchell, an established musician, and songwriter, while singing in Winnipeg folk clubs during this time.

Young joined ‘The Mynah Birds,’ a band led by singer Rick James, in 1966. They clinched a deal with Motown Label. But Rick James was arrested, and the band was dismantled. He, accompanied by the band’s bass player Bruce Palmer headed to Los Angeles searching for a job.

In Los Angeles, they formed a band called ‘Buffalo Springfield.’ Guitarist Richie Furay, drummer Dewey Martin, and Stephen Stills were the prominent members of this band. They released their first album ‘Buffalo Springfield’ in 1966. It was well received commercially. They went on to release two more albums before their split in 1968.

His famous album ‘Everybody Knows This is Nowhere’ was released in early 1969 while working with a band called ‘Crazy Horse.’ Though his stint with the band was short, he recorded some hit songs in later years in association with the band.

Young’s reunion with Stephen Stills in 1969 with a new band CSN&Y brought huge cheers for them as the band won the “Best New Artist” Grammy Award in the same year. He again left the band in early 1970 but later on recorded several albums reuniting with the remaining three members of the band.

Apart from songwriting and singing, Neil Young has ventured into film production as well. Using a pseudonym Bernard Shakey, he has acted in different documentaries and concert films and also directed and co-directed some films in his career. ‘Journey Through the Past’ (1979), ‘Human Highway’ (1982) and ‘CSNY Déjà Vu’ (2008) are a few such films.

Neil's 30 studio albums including the ‘A Letter Home’ released in April 2014 is an apt reminder of his huge popularity. He extensively toured around the world and participated in various live albums and concerts. His numerous hits in association with different bands throughout his career is a true testimony to his success.

Neil Young spent the first two years of conjugal life with his first wife, restaurant owner Susan Acevedo after marrying her in December 1968. Their eventual divorce came in 1970.

Immediately after the divorce, he had a long-term relationship with actress Carrie Snodgress. Young’s first son, Zeke was born out of this relationship on September 8, 1972.

He married Pegi Young in 1978 after having met her in 1974. The couple has two children, Ben and Amber. Unfortunately, both Ben and Zeke are diagnosed with Cerebral Palsy and Amber with Epilepsy. After spending 36 years of married life together, Young filed for divorce on July 29, 2014. As per the settlement, Neil Young gave his ranch to Pegi and moved to Los Angeles with Darryl Hannah, his present partner.