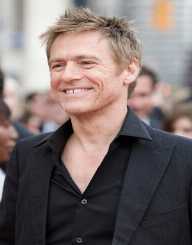 Bryan Guy Adams was born on November 5, 1959, in Kingston, Ontario, Canada. His parents were both British and emigrated Canada in the 1950s. His father was an officer in the British army and later joined the Canadian army. He also served as the United Nations peacekeeping observer and became a Canadian foreign service diplomat. Since his father had to travel a lot, Brian and his mother joined in. When his father was posted in Portugal, Adams attended the American International School of Lisbon. He also spent some time in Vienna and Israel.

Bryan Adams started out his career when he was 15 years old, fronting various local pub bands. One if his bands Sweeney Todd released the single “If Wishes Were Horses.” When Adams was 17 years old, he began working as a background vocalist in Vancouver studios.

The following year, Adams met Jim Vallance, who was a member of the rock band Prism. He had quit the band to focus on studio music career and write songs. The two agreed to work together and still do. In 1978, Adams signed a $1 deal with A&M records. During this time, he released several singles, which were mostly not successful.

In 1980, Bryan Adams released his first album, which marked the long-time partnership with co-writer Jim Vallance. His second album You Want It You Got It was released the following year. The most notable single from the album was “Lonely Nights”.

Although his first two albums were successful, Adams began to receive recognition only after his third album Cuts Like a Knife, which was released in 1983. The most notable singles from the album were “Straight from the Heart” and “Cuts Like a Knife.” The album was certified three-time platinum in Canada, platinum in the United States and gold in Australia.

His next album Reckless peaked at number one on the Billboard 200 chart. The single “It’s Only Love,” a duet with Tina Turner, was nominated for a Grammy Award. This album was Adam’s best-selling one, reaching five-time platinum certification. In 1984, Adams began his two -year world tour. The following year, he also started working with Roger Daltrey on his solo album Under a Raging Moon. 1987 album Into the Fire followed reckless.

In the 1990s Bryan Adams continued to be majorly successful. His album Waking Up the Neighbors reached No.1 on Billboard 200 and the single “(Everything I Do) I Do it for You” was featured in the motion picture Robin Hood. The song won a Grammy Award. In 1993, he collaborated with Rod Stewart and Sting for the top single All for Love. In 1999, he released The Best of Me, a collection of his most successful songs.

In 2002, Bryan Adams wrote songs for the DreamWorks film Spirit: Stallion of the Cimarron. The soundtrack “Here I Am” won him the Golden Globe Award for Best Song from a Motion Picture. His next album Room Service was released in 2004. He continued to write music for several motion pictures. His song “Never Let Go” was featured in The Guardian. He also wrote “Never Gonna Break My Faith” for the film Bobby, which was performed by Aretha Franklin and Mary J. Blige. Adams released his 11th album in 2008.

In 2010, Adams released a duet with Nelly Furtado “Bang the Drum” for the 2010 Winter Olympics Games in Vancouver. In 2014, Adams signed a contract with Verve Records and released the album Tracks of My Years. An album with his new material was released in 2015.

Bryan Adams is the founder of The Bryan Adams Foundation. The foundation aims to advance education and learning opportunities for young people worldwide. He has participated in various concerts to raise money. He performed in two-week Amnesty International tour and helped to commemorate the fall of Berlin Wall in 1990. He also was a part of CBS’s benefit in Toronto for the victims of the 2004 Indian Ocean earthquake. In 2006, he became the first Western artist to perform in Karachi, Pakistan to raise money for underprivileged children to go to school.

Adams became vegan when he was 29 to advocate for animal rights. He has also campaigned for the Southern Ocean Whale Sanctuary with Greenpeace. He is also a supporter of PETA.

Besides his work in music, Bryan Adams also works as a photographer. He is the honorary fellow of the Royal Photographic Society in London. His work has been published in Vogue, Vanity Fair, Harper’s Bazaar, GQ and many other magazines. Adams has also worked in fashion photography. In 2002, he was invited to photograph Queen Elizabeth II during her Golden Jubilee.

Adams is together with Alicia Grimaldi, who also helped to co-found his foundation. The couple has two daughters.