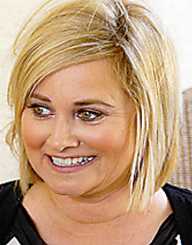 Maureen McCormick is well-known for her role as Maria Brady in the ABC television Sitcom, ‘The Brady Bunch.’ Other than her television appearances, she has released four studio albums and a country music album titled, ‘When You Get a Little Lonely.’

Maureen McCormick is the youngest daughter of William McCormick and Irene, born on August 5, 1956, in California U.S. She enrolled in Taft High School in Woodland Hills in California.

In 1954, Maureen McCormick won the 'Baby Miss' during the San Fernando Valley beauty pageant. Later in 1964, she appeared on national television advertising the Barbie and Chatty Cathy dolls. She also made television appearances on films such as, ‘I Dream of Jeanie,' ‘Honey West’ and ‘The Farmers Daughter.' In 1970, she played the voice role of Chatty Cathy doll in, ‘Chatty Cathy—Little Known Facts.’

Apart from her television appearances, McCormick released her first solo single in 1972 titled, ‘Trucking Back to You’ and recorded four albums alongside the Brady Bunch cast. A year later, in 1973, she recorded an album titled, ‘Chris Knight and Maureen McCormick’ that entailed both the duets and solo singles. She also released and performed a solo single titled, ‘Little Bird’ followed by ‘Love’s in the Roses.'

From 1969-1974, Maureen McCormick played in American television sitcom titled, ‘The Brady Bunch.' After the cancellation of the series, McCormick starred alongside Eve Plumb in the movie, ‘The Brady Braids’ in 1981.

Her performance followed other television appearances including, ‘Happy Days,’ ‘Love Boat’ and ‘Fantasy Island.' She also made supporting roles in films such as, ‘Vacation in Hell,' ‘Skate town, U.S.A’ Maker’ in 1979 and ‘Return to Horror High’ in 1987.

In 1995, Maureen McCormick released a solo country album titled, ‘When You Get a Little Lonely’ which received positive reviews. Notably, she was the first actress to play the role of Rebecca Crane in the soap opera ‘Passions’ and performed several musical and stage productions. By 1997, she played in the television biopic, ‘Get to the Heart: The Barbara Mandrell Story’ as Barbara Mandrell.

In 2003 she appeared on a reality show that featured her Marcia Brady character in ‘The Brandy Bunch.' In 2007, she played the fifth season of the VH1 reality show titled, ‘Celebrity Fit Club’ which she won by losing 34 pounds. A year later, she joined another reality shows such as, ‘Gone Country’ and ‘Outsiders Inn.'

Remarkably, Maureen McCormick released her first autobiography, ‘Here’s the Story: Surviving Marcia Brady and Finding My True Voice’ on October 14, 2008. The autobiography rated number 4 on The New York Times bestseller list. In March 2009, she joined a Central comedy roast of Larry the Cable Guy and took part in an Australian reality show titled, ‘I’m a Celebrity…Get Me out of Here.!’

In 2011 she played as Stage Mom in the TV Movie, ‘Prayer Hour’ followed by her role as Sarah in the film, ‘Christmas Spirit.’ By 2014, she performed a web-series as Mrs. Barnstormer in the movie, ‘Video Game High School.’

On August 30, 2016, Maureen McCormick had the privilege of participating in season 23 of ‘Dancing with the Stars’ which she finished on 8th place alongside her dancing partner, Artem Chigvintsev. She also guests starred in a TV animation series ‘The Loud House’ as Jancey during the second season of the episode ‘Future Tense.'

Maureen McCormick had a periodic romance relationship with Brady Bunch costar, Barry Williams. After the cancellation of ‘The Brady Bunch,' McCormick became cocaine and Quaaludes addict who made her trade sex for drugs on several occasions and also made two abortions. By 1981, she had lost her reputation as an actress and suffered from depression and bulimia.

Maureen McCormick married Michael Cummings, after meeting him in Church, on March 16, 1985, and the couple has one child, Natalie Michelle. As a family, they settled in Westlake Village in Los Angeles where she underwent rehabilitation and therapies. Notably, McCormick became a spokesperson for Children International in 2008.