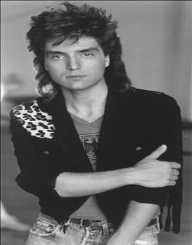 Richard Marx is a singer, songwriter, and rock musician. He takes inspiration from the likes of Elvis Presley and has sold more than 30 million copies of his albums. He has won several Grammy awards for his songs. 17 of his singles have reached the U.S. Top Charts, and he is also a philanthropist.

Richard Marx was born on September 16, 1963. His star sign is Virgo. His parents Ruth and Dick Marx are also musicians.

In a family of musicians, young Richard Marx learned to play the guitar and the piano quite early. As a child, he also sang in jingle commercials.

Richard Marx attended the North Shore Country Day School, Illinois. Good luck shone on him early as his songs reached Lionel Richie – a famous recording artist who was impressed by his talent. Richie invited him to work on his albums after he graduated.

With a great opportunity from Lionel Richie, Richard Marx started his musical career as a vocalist.

His backing vocals on Richie’s album Can’t Slow Down earned him enough recognition to get offers from other famous artists like Madonna.

He further increased his popularity by appearing in TV cameos like a role in the movie Coach of the Year. He gained even more fame after Kenny Rogers recorded his songs which reached the #1 Charts along with James Ingram and Kim Carnes.

Richard’s debut album came out in 1987. His song Don’t Mean Nothing earned him a Grammy Nomination in 1988. The album became the greatest hit of the year in the U.S.

His next two albums Repeat Offender and Rush Street went multiple-platinum. In 1994, he released Paid Vacation – his fourth consecutive multi-platinum album and this marked the beginning of his legacy that spans over a decade and a half of extreme success.

Three years later, he released Flesh and Bone and followed this with another album titled Days in Avalon in 2000.

His single When you’re Gone from the album My Own Best Enemy was extremely popular all over the world.

In 2010, Richard Marx released his first acoustic album titled Stories to Tell. Christmas Spirit came out in 2012 marking the end of a dry period of no hit songs. Little Drummer Boy brought him the success he hadn’t tasted in over a decade.

Richard Marx continues to make music and actively collaborates with other famous stars. He is also involved in a large number of charity projects often using his concerts to raise money for them.

Richard Marx won four Grammy Awards in 2004 for the album Dance with My Father. He was also nominated for his song Don’t Mean Nothing in 1988.

Richard Marx is actively involved in charity works. He regularly holds concerts to raise funds for charity – some organizations he’s associated with are American Cancer Society and the Make a Wish Foundation.