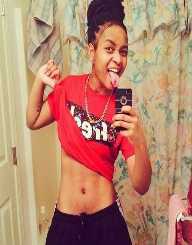 Domo Wilson is a renowned Vlogger, and Youtuber from the United States  Wilson rose to fame as a result of her comic posts on social media platforms, for example, Facebook, YouTube, and vine  Domo Wilson often posts personal videos, with her performances that are usually charismatic and hilarious. Also, Domo always portrays an honest approach to various issues, an aspect that many of her fans love.

Domo Wilson still focuses on daily life situation, bringing out the fun bits and serious life issues like living as a gay person. Wilson has many social media accounts with a large number of followers and fans. She often associates with her partner called Crissy Danielle, with whom she operates some of the social media accounts. Apart from being a great social media personality, Domo is also a skilled singer and performing artist, and often acts live in clubs and shows around the United States

Domo Wilson was born on 24th June 1994, in Chicago Illinois, with birth name Dominique  Domo is an American citizen and is believed to be of black ethnic background. Domo has five siblings, consisting of a brother and sister, whereby the youngest brother was born in 2016. Her family relocated from Illinois to Valparaiso, Indiana when she was still young, and she was mostly brought up there.


Rise to fame and social media

Domo Wilson rose to fame much due to her video posts on Vine in 2014. The videos portrayed her live and comical acting skills, which immediately gained her favor from a large number of fans. However, Domo won considerable fame through her YouTube channel which she started in March 2010. Wilson regularly posted funny videos, songs, and Vlogs. Domo Wilson is mostly known for these comic videos.

Domo Wilson claims that her Vlog content is mainly based on her `confusing’ life experience. In her videos, Domo gives insight to day to day social struggles of a young woman, for example avoiding conflicts in various relationships

Also, Domo Wilson is a skilled songwriter and musician. She has released a couple of singles, for example; `it’s cool,’ `real,’ `for you’ and `come through.’ Wilson is very multi-talented. Apart from singing and acting, she is also a skilled instrumentalist and always gets better with time.

Domo Wilson is engaged to a fellow YouTuber, Crissy Danielle. Domo came out publicly through a video post in July 2014, through her YouTube channel. She revealed that she liked girls from a very early age and that she once attended school dressed as a stud, whereby she could not help it enjoy the attention. Domo claimed that although she was scared of the feelings at first, she pulled herself together and came out, initially through her mother in 2010.

In 2015, Domo Wilson informed her fans that she would like to have a kid, through a sperm donor. However, Domo later revealed that she had suffered a miscarriage through a video post. However, she later announced with her fiancé Crissy that they were expecting a baby, at around July 2016.