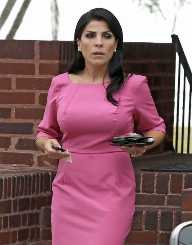 Jill Kelley is an American socialite who led to the exposure of the extramarital scandal involving US General David Petraeus.

Jill Kelley was born in Beirut Lebanon on 3 June 1975. At birth, her parents named her Gilberte Khawan. Her parents were Syrian immigrants living in Lebanon. Together with her identical sister, she was part of the five siblings of the family. She was raised up in Philadelphia after her parents immigrated to the USA in 1976. She went to Lower Moreland High School in Pennsylvania. After her graduation from high school, Kelley got a job at the University of Pennsylvania. She became a research assistant to a resident doctor. During this time, she enrolled at Beaver College for her first degree. Kelley got her degree from the private college in medicine.

In typical Arab style, the Khawan sisters loved to celebrate. They were fond of hosting lavish parties despite their lack of funds. Gradually, Kelley and her twin sister became social media celebrities. Not everyone was invited though. They hosted all who mattered in the society. After her marriage, she moved with her husband to Tampa Florida. The socialite life continued there as well.

Kelley had contact with most of the top command of the military. Most of them had been guests at the parties hosted at her Tampa home. Others were connections she had during her work as a medical researcher and as the honorary diplomat of the Korean Republic to the US. She was also involved in other diplomatic efforts in the Arab world.

As a socialite, Kelley was in contact with a legion of followers on social media platforms. Her connections on the diplomatic front exposed her to the top brass of the US Central Command in the Pentagon. Kelley’s family had hosted many US military figures at their home. This included General David Petraeus and General John Allen.

In early 2012, Kelley started getting anonymous messages in her email. When the messages became annoying, she feared for her life. In May 2002 he turned to the FBI police for help. The FBI commenced their investigation and managed to trace the source. The sender was identified as Paula Broadway. Broadway was the editor in charge of General Petraeus’ autobiography. Broadway had been sending her messages to dissuade her from coming to close the US General.

When the FBI opened an investigative file into the matter, the net was widened to include the General. The findings exposed an extramarital affair between the General and his autobiographer. The military also conducted its inquiry into allegations that the General and others had exposed classified information to Broadway and Kelley. The inquiry exonerated the military chief. On 9 November 2012, the former military chief and head of the CIA resigned from his post. Kelley in her search for police protection had uncovered a clandestine relationship that cost General Petraeus his job.

Kelley has been an advocate of peaceful relationships for a while. Her efforts in mediating and creating contacts between Arab nations has her brought many admirers. She has been instrumental in creating a way for many Middle East diplomats to have meetings with US political and business administrators.

After the investigation that brought down General Petraeus, Kelley has waged relentless advocacy on the right of privacy of US citizens. She has taken her campaign to public debates and all the way to Congress. She claims the privacy by a private citizen is a fundamental right in the US constitution. The US government or the police should not be able to access information at will.

Kelley got married to Scott Kelley in 1999. The two met at the University of Pennsylvania. Jill was a research assistant and Scott was a trainee surgeon. The wedding was officiated in the Catholic tradition. The couple lives with its children in Tampa Florida.

As she continues to live, Kelley will always be the socialite she is. Her involvement with high-end personalities is part of her work in diplomatic circles. Whether she was truly involved with the General or not, is a matter of debate. History will prove that case in the days to come.