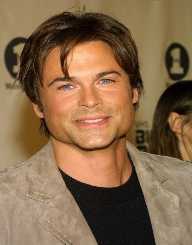 American actor Rob Lowe was born on the 17 March 1964 in Charlottesville, Virginia. His parents were Barbara Lynn and Charles Lowe, and they divorced when Lowe was young.

Initially, Rob Lowe was educated at Oakwood Junior High School in Dayton, Ohio. Then when his mother moved to California with her two sons, he was enrolled at Santa Monica High School.

Rob Lowe worked as a model and emerging actor before appearing in 1983 made for television film Thursday’s Child, winning attention when he received a best-supporting actor Golden Globe nomination.

Rob Lowe impressed playing Sodapop Curtis in The Outsiders and then appeared in St Elmo’s Fire with Demi Moore and Estevez. He played Baron Tuzenbach in Chekhov's play The Three Sisters (1987). His portrayal of a mentally disabled young man in Square Dance (1987) won him a second Golden Globe. He continued working in television and film throughout the 1990s and 2000s including the 2004 miniseries Salem’s Lot which was based on a Stephen King novel. He had a huge success with Beach Girls (2005) The same year he played Jeff Megall, a movie agent in the film Thank You For Not Smoking. Television roles also included The West Wing (1999-2003), Brothers and Sisters (2006-2010) and Parks and Recreation (2010-2014). In 2010, a documentary was made entitled Brat Pack: Where Are They Now.

As a young actor in the 1980s, Rob Lowe was part of a group known as the Brat Pack. They were Demi Moore, Judd Nelson, Molly Ringwald, Ally Sheed, Emilio Estevez, Anthony Michael Hall, Andrew McCarthy and Rob Lowe. The films associated with this group are The Breakfast Club and St Elmo’s Fire.

When he was a twenty-two, he was involved in a sex tape scandal involving an underage girl. He had thought the young women was twenty-one when in fact she was underage. Talking to the Daily Mail Reporter in 2011, Rob Lowe said that the scandal had turned out to be a good thing for him because he quit drinking and has been sober for twenty years.

Before marrying Sheryl Berkoff in 1991, Rob Lowe was involved with some women including Melissa Gilbert and Princess Stephanie of Monaco. Berkoff and Lowe married in July 1991 and had two sons, Matthew and John.

Rob Lowe published a memoir in 2011 Stories I Only Tell My Friend. He followed this up with Love Life (2015).

Viral infection as a young child caused permanent deafness in one ear.

Rob Lowe founded the Homeowner’s Defence Fund in Santa Barbara County. Some of the charities he has supported include Believe in Dreams, Dream Foundation, Elton John AIDS Foundation, Entertainment Industry Foundation, Habitat For Humanity and Last Chance for Animals.