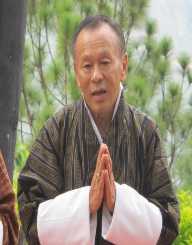 Jigme Thinley was born in September 9, 1952 in Bhutan. He was born into an influential family that had close ties with the royals. His family served the monarchy since its inception. His father was the royal secretariat. Later on his family moved to Thimpu after the third king shifted Bhutan’s capital from Punakha to Thimpu. In his esraly education he studied Bhutanese and then Hindi and English. He was taught in Dr, Graham’s Homes’ in Kalimplong in India. Thinley portrayed leadership skills from when he was in school. He led several groups in school that he was made a member of the Board of Management of the school. He was later inducted as an Ambassador to the United Nations in New York.

In 1974, he graduated from the St. Stephen’s College in Delhi, India. He took place in the coronation of the fourth Bhutanese King whom he remained in close association with him throughout his rule. The king later appointed him into the civil service so as to look after the affairs of the palace. In 1975, Thinley went to the United States for further studies. He joined Pennsylvania State University where he graduated from with a Master’s Degree in Public Administration. He also attended the Manchester University, England where he obtained a certificate in Manpower Planning and Management.

In 1976, Thinley began his career in the civil service in Bhutan. In 1987, he was conferred the title of Dasho, and he also received the Red Scarf. In 1990, he was appointed the Eastern Zone administrator. Two years later he was appointed secretary in the Ministry of Home Affairs. In 1994, he became the Deputy Minister of Home Affairs. In the same year, he was awarded the Orange Scarf, and he was also appointed as the Permanent Representative of Bhutan to the United Nations office in Geneva. In 1998, he became the Prime Minister of Bhutan, a post he held up to 1999.

In 1998, Thinley became the Minister of Foreign Affairs of Bhutan, a post he held up to 2003. He was also the Minister of Home and Cultural Affairs. In 1999, he received the Druk Thuskey from the King of Bhutan in recognition of his contributions in the development of Bhutan. In 2003, he became the Prime Minister of Bhutan again, a post that he held up to 2004. In 2008, the first democratic election in Bhutan was held, and he became the first democratically elected Prime Minister. He held the post until 2013. Thinley is also the representative of the constituency of Nanong Shumar, Pemagatsel. His government came up with policies that would lead to the development of Bhutan. In 2008, he was awarded the Order of Great Victory of the Thunder Dragon for his excellent dedication, commitment, and loyalty. In 2009, he became a member of the International Advisory Board of Netherlands Development Organization.

He married Rinsy Dem with whom he had a son, Palden Thinley. His son married a princess of the place of Bhutan. He is currently sixty four years old.