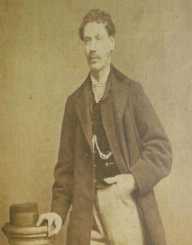 Wyatt Earp was born on March 19, 1848, in Monmouth, Illinois. His father Nicholas raised his kids with a lot of roughness. He was a heavy drinker and always tried to strike rich. When Wyatt was only two years old, his family joined a group of around hundred more people to relocate to San Bernardino County, California. His father intended to buy farmland there. While on the way, Earp’s sister became ill and died at only ten months of age.

They were close to Pella, Iowa, and his father bought a 160-acre farm. When Earp was 13 years old, the Civil War broke out. His two older brothers joined the Union army, but he and his younger brothers stayed in charge of the 80-acre field of corn. His father was recruiting and drilling new soldiers in the military. Wyatt was too young to enlist, but he tried on several occasions.

His family then moved to California and Earp left them to fight in the frontier, when he was 17 years old. While he wasn’t working. Earp learned to gamble and box. In 1869, Earp returned home and replaced his father as the constable of the township. The following year, he married a local girl Urilla and built a house. She was expecting their firstborn when Urilla caught typhus and died.


Trouble With The Law

After his wife’s death, Wyatt Earp’s life took a turn for the worst. He had many legal issues. He was charged with collecting license fees from local schools and failing to turn them in. Earp was also alleged to falsify court documents. He was also arrested for the theft of two horses. For the crime, he was incarcerated, and the bail was set to be $500. Earp never waited for the trial, but escaped and moved to Peoria, Illinois. There he was the owner of a floating brothel.

In 1974, Wyatt Earp moved to Wichita, where he worked as a bouncer in a brothel. Wichita was at the time a destination for cattle drives from Texas. This meant that the town was always full of drunk, armed cowboys. At the time, Earp was looking for a new job and joined the Wichita marshal’s office. He entered the race for Wichita marshal’s election.

Wyatt was accused of using the office to help his brothers become lawmen and got into a fist fight with former marshal Bill Smith. For this incident, he was arrested, and his duty as marshal was ended. His opponent in the election Meagher won, and Earp was never re-hired. He then moved to Dodge City, Kansas. Over there he again joined the marshal’s office.

He again moved, now to Tombstone, Arizona. His brothers Virgil and Morgan were living there already. Earp reinvented himself and started working as a lawman. There were rumors that there are lands containing silver in Tombstone, but it did not come true.

The Cowboys And O.K. Corral

In 1880, U.S. Army captain Joseph Hurst asked Virgil Earp to help him track down cowboys who had stolen six miles from the army. Virgil requested his brothers Wyatt and Morgan to help. They found the mules at a ranch of Cowboy McLaury. At the time stealing mules from the army was a federal offense. But the cowboy and Hurst made a deal, the mules were returned, and McLaury was free.

A few days later the Cowboys showed up and laughed at the Earps and Hurst. Hurst then printed a handbill describing the theft and publicized it in the local papers. The Cowboys threatened the Earps to kill them. The same year, Wyatt Earp was appointed the Deputy Sheriff and held the position for three months.

On October 26, 1881, the quarrel between the Earps and the Cowboys came to a head. Earps were threatened to be killed for several weeks. Virgil Earp was then the town’s marshal and learned that the Cowboys have gathered near the O.K. Corral. He asked his brothers Wyatt and Morgan, as well as their friend Doc Holliday to assist him.

Beforehand Virgil had struck a deal for $6000 that a local farmer Ike Clanton will help him to close in on some outlaws. Clanton soon turned against Earps, being afraid that the Cowboys will learn about his deal. On October 26, the Earps and Holliday met Clanton, his brother Billy and two other men who came to help. During only 30 seconds, the most celebrated gunfight in the history of West took place. Virgil and Morgan Earp, as well as Holiday, were injured, and Wyatt Earp came out of the gunfight with no injuries. The rest were killed.

The tensions in the town rose high. Ike Clanton accused Earps and Holliday of murder, but there were not enough evidence to prosecute them. Nevertheless, their reputation was tarnished, and they were seen as robbers and murderers. Ike Clanton then went on a rampage to kill the Earps. He injured Virgil in the arm and assassinated Morgan. Wyatt set off in search of vengeance. Wyatt and Holiday gathered a few more men and went on a killing spree, taking on the West’s wild cowboy culture.

The American West eventually settled down, and Wyatt Earp looked for other ventures. In his last years of life, he longed for a film that could tell his story. Although during his life his dream didn’t come true, Earp’s life has had a significant inspiration for westerns.