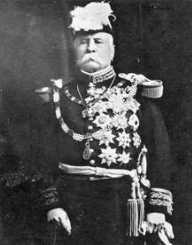 Porfirio Diaz was a Mexican seminarian, law student military general, politician, dictator, and revolutionist all summed up in one person.

Jose de la Cruz Porfirio Diaz Mori was born on September 15, 1830, in Oaxaca, Mexico. He was the son of Jose Diaz Orozco and Maria Mori Cortes. He was of mixed parentage. His father was of Spanish European descent, while his mother was of mixed Spanish and Native American blood.

Diaz grew up in Oaxaca in dire poverty after his father died. His mother took him to study theology at a local seminary when he turned 15. She hoped her son would one day be a priest. During that time, the priesthood was one of the most honored and powerful vocations in society. The church leadership influenced politics, owned land, and ran the education institutions countrywide.

He obliged and went to the seminary. He was not keen on being a cleric. When the Mexican American War erupted, many young Mexicans volunteered for the military. In 1846 Diaz accompanied other seminarian youth to serve in the army. As fate would have it, the war ended before Diaz went to the battlefield. On his return in 1848, he decided to join a local Arts school to study legal matters. At the school, he met Benito Juarez. Juarez was a liberal-minded lecturer who later rose to become Mexico’s president. Diaz dropped out of Law school and joined the military.

In 1854 he fought alongside other rebels in a bid to overthrow the government of President Antonio Lopez de Santa Anna. The rebels led by Benito Juarez defeated the Mexican army and seized power. President Santa Anna fled to the US. Diaz had proved himself as a formidable battlefield commander. When the French invaded Mexico to overthrow Juarez, Diaz fought the French in the Battle of Pueblo and won. The French were repulsed by an inferior trained army. The French eventually overthrew Juarez and Napoleon installed proxy ruler, Emperor Maximillian I.

Diaz fought alongside Juarez and dethroned the French occupation. Emperor Maximillian was captured and killed. Juarez became president again. Diaz left the army and returned a hero to his Oaxaca home town. In 1871 Diaz started an insurgency against Juarez. He was protesting against the president’s reelection for a second term in office. In 1872 Juarez died in office and was succeeded by his deputy, Sebastian De Tejada.

In early 1876, Diaz fled into exile in the US after several insurgency campaigns against President Tejada. In November 1876, Diaz led a successful military campaign and overthrew Tejada. Diaz left the government to a caretaker president until the elections in May 1877. Diaz won the elections and was sworn in as president.

President Diaz brought the one-term presidential law to effect. He instituted major reforms into the economy. His government paid off the national debt and spurred economic growth. Diaz implemented overhauls in the infrastructure sector. He built roads, railway lines, factories, and mining regions. He encouraged foreign countries to invest in Mexico. The Americans, British, Germans, Spanish and other powers benefitted from the open market.

Mexico became a modern economy. Diaz strengthened the national security, and the electrification of the major cities. He consolidated his power by giving high ranking positions to people across the spectrum. No community was left out. Diaz was pragmatic not to antagonize anyone.

As the economy became stronger, so did the rural community sink deeper into poverty. Diaz policies benefitted the few rich elites. Disgruntled voices sprang up in the countryside. Diaz responded by abolishing the presidential term limit, muzzling the media, and ruling with absolute authority. He went on to rule for 35 years.

In February 1908 after 31 years in power as president, Diaz announced his retirement from politics. He would not be seeking reelection in the upcoming presidential polls. Senior politicians within his inner circle started a power struggle to succeed him. Instead of retiring, Diaz allowed a little known Francisco Madero to vie against him in the polls.

Madero lost and claimed the elections were rigged. Madero got support from several regional warlords and deserters from the Mexican army. Soon the Diaz government fell. On May 25, 1911, Diaz resigned and fled to France.

He died in France on July 2, 1915. He was buried in Paris. Diaz is seen as both a hero and a villain. He led a decorated military life. His early years as president transformed México. Yet by the time he fled into exile, Diaz had eroded all the good things he had created.