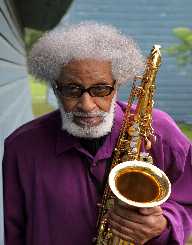 Walter Theodore Rollins was born 7th September 1930, in New York City, New York, in the United States. Rollins grew up in Harlem, and he was the youngest of three children.

He studied at Edward W. Stitt Junior High School, and then graduated from Benjamin Franklin High School in 1947.

Rollins got his first alto saxophone when he was a youngster, and by the time he was in high school, he was playing in a band with Jackie McLean, Kenny Drew, and Art Taylor, who would all go on to become legends in their own rights in the jazz industry.

Rollins began performing on a professional basis as soon as he was finished high school. By 1949 he was becoming recognized, and was recording with the likes of Bud Powell, and Fats Navarro.

Rollins then lost his way for a while. In 1950 he was arrested for armed robbery. He spent nearly a year in Rikers Island jail. After being released on parole, he was arrested again in 1952 for using heroin, which was a violation of his parole terms.

Between 1951 and 1953 he recorded with several artists, including Miles Davis, Charlie Parker, and the Modern Jazz Quarter, amongst others. In 1954, he recorded some of his most famous compositions with a group led by Davis.

In 1955, Rollins went into rehabilitation at the Federal Medical Center in Lexington, which was the only facility available at the time for drug addicts. Much to his credit, Rollins broke his heroin addiction. After he left the Center, Rollins moved to Chicago.

He recorded with the Miles Davis Quintet in 1955, as well as the Clifford Brown-Max Roach Quintet. In 1956, Brown and his pianist died in a car accident, and Rollins continued to record with Roach, and then began recording under his own name.

Rollins recorded some of his most acclaimed music during the ensuing years.

Towards the end of 1956, Rollins recorded with Thelonious Monk, and then released his first album with Blue Note Records. Rollins also started taking famous songs such as Toot, Toot, Tootsie Goodbye and There’s No Business Like Show Business, and turned them on their heads by using them to improvise with his sound.

In 1957, Rollins made his debut at Carnegie Hall. He continued recording and performing for the next two years. In 1959 he toured Europe for the first time, but afterwards, he stepped out of the limelight and took a three-year break from music.

During his three years away from music, Rollins took up yoga and practiced regularly.

Rollins returned to his jazz roots late in 1961. He took up a residency at the Jazz Gallery in Greenwich Village. He released his comeback album in 1962, called, The Bridge, and throughout the 1960s, he lived in Brooklyn, New York.

In 1963, Rollins toured Japan for the first time.

In 1969, Rollins once again took a sabbatical away from public life. This time the break was for two years, and during his break he visited an ashram in India for several months to further study yoga, meditation, and Eastern philosophy.

In 1971, his first performance back was in Norway. He continued performing and recording, and in 1978 he toured with McCoy Tyner, Ron Carter, and Al Foster as the Milestone Jazzstars. During this period in the late 1970s, Rollins also began performing solo.

Rollins was so popular by this time, that he no longer played the small nightclubs. When he did perform live, it was in large concert halls or outdoor arenas.

He toured regularly through the 2000s, and in 2006 he released his first album in five years called, Sonny, Please.

2012 was the last time Rollins performed in public due to his health.

During his career, he recorded over 40 studio albums, and 11 live albums.

Rollins received many awards and honors, including the following:

2010:   Elected to the American Academy of Arts and Sciences

Rollins married an actress and model in 1956 by the name of Dawn Finney, but they were only together for a brief time.