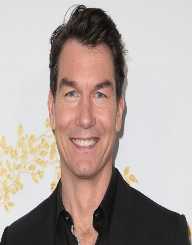 Jerry O’Connell is an American actor, producer, and director.

Jeremiah O’Connell was born in Manhattan, New York, on February 17, 1974. His father, Michael, worked as an art director at an advertising agency. His mother, Linda, worked as an art teacher. He has a younger brother named Charlie.

As a young working actor, O’Connell studied at the Professional Children’s School in Manhattan. From 1991 to 1995, he studied film and screenwriting at New York University. In 2009, he enrolled at the Southwestern Law School in California. He soon dropped out in order to focus on his work.

O’Connell started his career as a child. At the age of nine, he appeared in a commercial for Duncan Hikes cookies. In 1986, he starred in the film Stand by Me. The following year, he starred in a commercial for Frosted Flakes. He had small parts in the TV movies The Room Upstairs and Ollie Hoopnoodle’s Haven of Bliss. He appeared in the TV show The Equalizer and in the film Police Academy 5: Assignment Miami Beach. In 1988, he landed the lead role in the Canadian sci-fi sitcom My Secret Identity. He played a teenage boy that accidentally develops superpowers. The series ended in 1991.

After that, O’Connell took part in the shows Charles in Charge, TGIF, Blue River, and Camp Wilder. In 1995, he starred in the fantasy series Sliders. Apart from acting, he also wrote, produced, and directed several episodes of the show. He appeared in a number of films, including Calendar Girl, Jerry Maguire, Scream 2, Can Hardly Wait, Body Shots, and Mission to Mars. In 1999, he starred in Mariah Carey’s music video for “Heartbreaker”. From 2001 to 2007, he took one of the lead roles in the crime series Crossing Jordan. In the meantime, he had small parts in the shows Rome Fire, Going to California, and Without a Trace. In 2004, he wrote and produced the romantic comedy First Daughter.

O’Connell played Captain Marvel in Justice League Unlimited and Superman/Shazam: The Return of Black Adam. He appeared in two video parodies mocking Tom Cruise and Hillary Clinton. He appeared in the films The Alibi, Room 6, Man About Town, Obsessed, and Baby on Board. He took part in the Broadway plays Seminar and Living on Love. He voiced Superman in Justice League: Throne of Atlantis, Justice League Dark, Justice League vs. Teen Titans, Reign of the Supermen, and The Death of Superman. He had smaller parts in many TV shows. They included Ugly Betty, Mistresses, Burning Love, Scream Queens, The Big Bang Theory, Workaholics, and many others. He hosted the Pepsi Smash Super Bowl Bash and the Wendy Williams Show. He voiced Shazam in the video game Infinite Crisis.