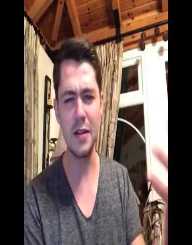 Damian Joseph McGinty Jr. is an actor and singer from Derry, Northern Ireland. He has been giving presentations for over a decade.

Damian Joseph McGinty Jr. was born to the couple Damian McGinty, Sr and Joanne McGinty. Damian was born on 9th September 1992. He has two siblings, Emmett and Gemma. Damian participated in singing competitions when he was very young. He achieved his first prize in the singing competition when he was just five years of age. In another singing contest in 2016, he got his second prize. A year later his song was recorded on CD for a charity. Sharon Browne, Producer of Celtic Thunder and Music Director Phil Coulter, requested Damian participate in their first show.

Damian McGinty was admitted to the newly established Celtic Thunder in 2007. He was 14 years at that time. He had a high-pitched voice at that time and as his age advanced he acquired a high pitch between tenor and bass. He visited the US and Canada during his tenure with Celtic Thunder. Damian presented six TV special shows on PBS. He had an opportunity to give a presentation at the White House. He marketed over a million CDs and DVDs.

Damian McGinty, in 2011, competed for a place on Oxygen television presentation, The Glee Project. Damian emerged as one of the top twelve finalists amongst the many thousand competitors at the Myspace audition quest. McGinty’s performance of “Beyond the Sea” was rated excellent by the judges and was selected a joint winner with Samuel Larsen for a seven event of the Fox series Glee. Damian quit the Celtic Thunder in preference to Glee.

He performed as Rory Flanagan, a student under the foreign exchange programme, residing with Brittany S Pierce’s family. He made friends with Finn Hudson. Damian presented two of his solo songs, “Take Care of Yourself” and “Bein` Green” in the event “Pot o`Gold.” Damian’s excellent performance in the seven episodes was the reason for extending the contract to the end of the third season and was further extended to the fourth season of Christmas events with 18 events.

Damian had a simple and clear voice. Damian’s melodious singing of the song “Blue Christmas” was on the Glee Christmas album. A musical “Home” was his solo performance. “Home” was also a group and two-some performance. He played an entertaining character about his Irish pronunciation on an MTV “Glee-Cap.”

Damian McGinty has more than half a million fans.

He has made many music presentations and to name a few:

Let the River Run -  Damian McGinty and Mairead Carlin rendered the song at BBC TV Gala show – Sons and Daughters. This song was published as a single by Carly Simon in her Iris Records and McGinty’s Records in 2014. Carly also performed her song with Damian and Carlin at the Oceana Partners Awards Gala in Beverly Hills.

McGinty showcased in five PBS TV specials during the period he as staying with Celtic Thunder: The Show, It’s Entertainment, Christmas, Heritage, and Storm.

Damian McGinty performed with Paul Byrom of Celtic Thunder in ‘This is the Moment’ show.  Another show “The Power of Music” with Ethan Bortnick in 2014  during the excursion in the US.

He rendered the National Anthem before the baseball team play between Kansas City Royals Vs. Cincinnati Reds in May 2015. His performance is rated as remarkable. Damian is still rendering solos and shows

Damian McGinty published his first musical compilation of songs (EP) in 2012. The EP includes: Run, This Is Your Song, With or Without You, Yellow and That’s What Friends are For.  This EP was #3 on iTunes for the US and #1 for Ireland and Mexico and Peru. He has commenced authoring his songs for his first musical.

He has many CDs and DVDs to his credit.

The city of Derry in Northern Ireland was named the UK City of Culture in 2013, and Damian McGinty was selected as a Cultural Ambassador.

He has donated funds for various charities like Concern Worldwide, Trevor Project, Kids Bearing Cancer, Oceana, and others.

Damian McGinty has participated in many television shows and to name a few:

Damian Joseph McGinty has acted in a movie Santa Fake as Pat Keeley, a Lead Role. (2018)