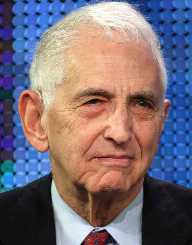 Daniel Ellsberg is an American political activist and government official.

Daniel Ellsberg was born in the city of Chicago, on April 7, 1931. His father, Harry, was an engineer. His mother, Adele, worked with charity. They were Ashkenazi Jews who later converted to Christian Science. He spent his childhood in Detroit. When he was fifteen years old, his mother and his sister died in a car accident.

Daniel Ellsberg was a gifted child, excelling in both piano and math. He attended Cranbrook School, a prestigious preparatory school. He managed to get a scholarship to attend Harvard University. He graduated with a degree in economics in 1952.

He studied at Cambridge University for a year. From 1954 to 1957, he served in the U. S. Marine Corps. He then returned to Harvard to get his master’s degree. He completed his doctorate in 1962. In his dissertation, he developed a paradox in decision theory. It later became known as the Ellsberg paradox.

In 1958, Daniel Ellsberg started working for the RAND Corporation, a nonprofit organization which advised the U. S. Government. He was a strategic analyst, and he focused on nuclear strategy. During the Cuban Missile Crisis, he was requested to come to Washington to work with different groups serving the National Security Council. In 1964, he started working for the Defense Department.

His main task was to create plans that would escalate the Vietnam War. The next year, he relocated to the American Embassy in South Vietnam. He returned in 1967 after becoming infected with hepatitis.

After returning to the United States, Ellsberg continued his job at the RAND Corporation. He also worked on a top-secret report containing documents about the Vietnam War. These documents were ordered by the Defense Secretary, and they later became known as the “Pentagon Papers.”

Ellsberg started to disagree with the American involvement in the Vietnam War. But, he kept quiet, and he continued to serve the government. He soon became inspired by the activist Randy Kehler and by the works of Gandhi and Martin Luther King.

Daniel Ellsberg started attending anti-war protests. In 1969, he made secret copies of the Pentagon Papers together with his colleague Anthony Russo. He offered them to several Senators, as well as to some scholars at the Institute for Policy Studies. He then leaked them to Times magazine.

Times magazine started publishing the papers in 1971. A court order issued by the government stopped the magazine from publishing the documents for 15 days. During that time, Ellsberg leaked them to 18 other newspapers. He then publicly admitted that he was behind the leak.

The Supreme Court charged Ellsberg with violation of the Espionage Act, conspiracy, and theft. Soon, evidence came forward that the government wiretapped his calls and messed with his files at his psychiatrist’s office to discredit him. His case was dismissed by the court.

Daniel Ellsberg wrote three books on the war – Risk, Ambiguity and Decision, Secrets: A Memoir of Vietnam and the Pentagon Paper, and The Doomsday Machine: Confessions of a Nuclear War Planner.

He also co-wrote other political books with other authors. He published pieces in Harper’s Magazine, The Guardian, and many other publications. He also appeared on television shows, such as Democracy

Now and The Colbert Report. He frequently gave lectures and participated in protests. He was active in the efforts against the wars in Iran and Iraq. He supported Chelsea Manning and Julian Assange. He was one of the founders of the Freedom of the Press Foundation and the Veteran Intelligence Professionals for Sanity.

Daniel Ellsberg was married to his first wife, Carol Cummings, for 15 years. They have a son, Robert, and a daughter, Mary. He married Patricia Marx in 1970. They have a son named Michael.