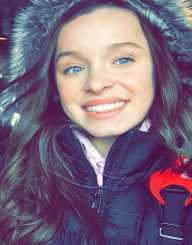 With the current number of talents discovered each day through social media platforms, it is an undeniable fact that social media has made talent search easier. Aside from that, it helped people to introduce their creativity to the world without any hustle as compared to previous years. Many talents went to waste in the past as there were no such platforms and it was quite expensive using the traditional media, hence one needed a manager etc. for financial assistance.

However, one can quickly do all of this starting with the creation of a social media account, and the rest will be to engage fans and followers with nothing but quality videos displaying your talent. The sky will be your limit. Many people have taken advantage of these platforms and Rese Hatala is one of them. Born on July 02, 2006, Reese is a Canadian dancer and uses YouTube to display her talent to the world.

The young princess has an extraordinary dancing talent and uses her quirky dance moves to wow the world. With an intensive practice and the help of her parents, Rese Hatala has become phenomenal to watch, and that has not gotten into her head as she continues to strive for the best. Reese started displaying her talent at local events before jumping on the internet to let the world have a feel of her impeccable talent.

Reese Hatala was born on July 2, 2006, in Sherwood Park, Alberta, Canada to Chad Hatala and Teresa Hatala. She is the second child of her parents with an older sister called Taylor Hatala. As a child, Reese alongside her sister started displaying some fantastic dance moves, and with the help of her parents, the skills were developed. The sisters are trained in dancing styles like Ballet, Tap, and Jazz. It does not surprise the level of success she has achieved as the young dancer practices four hours each day with her sister. Her success can also be attributed to the loving and caring family she finds herself, which she admitted to during an interview.

Rese Hatala showed interest in dancing at the young age of three and the skills sharpened with the help of her parents. After taking some dancing lessons to add up to her talent, Reese started to perform at local events. Being appreciated locally, she decided to display it to the world, and that is working quite successfully with the use of YouTube. After joining YouTube on May 26, 2015, Reese has posted compelling videos of dancing skills, which have attracted fans to her channel. She currently has over 3000 loyal subscribers and counting.

Rese Hatala generated the most likes and views with the dance clip, Anaconda, choreographed and co-starred with Laurence Kaiwai and her sister, Taylor hit the internet. Taylor and Reese also have some exciting videos on her channel. The star in the making Reese has always found it comfortable performing in front of large crowd, which some adults find challenging to do. With success she has achieved as a young dancer, Reese was included in the YouTube channel DanceOn. The channel features others great talents, both singers, and dancers. She plans to add singing to her dance shortly and make it her professional career.

What Makes Reese Hatala So Special

Rese Hatala has become special among her likes because of her ability to master different dance moves within a short period. This is rare among her age group, and that makes her special. She can dance comfortably among artists older than her without a feeling of intimidation, and her videos speak for themselves.