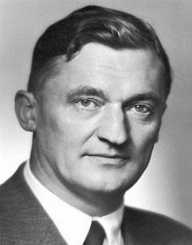 Hugo Theorell is a Nobel Award-winning Swedish scientist whose research discovered how enzymes break down food into usable energy within living organisms.

Hugo Theorell was born as Axel Hugo Theodor Theorell on July 6, 1903, in Linkoping, Sweden. He was the son of Thure and Armida Bill Theorell. His father served as a head surgeon at a local hospital in Linkoping. He went to a local secondary school exiting in May 1921. He got admitted to Karolinska Institute for a degree course in medicine in the late months of 1921. Hugo graduated from the college in 1924 with a Bachelor degree in Medicine.

He got employed at the Institute of Medical Chemistry in the capital city, Stockholm. He taught as the associate professor at the college from 1928 to 1929. After finishing his temporary internship, Hugo moved to France. He joined the Pasteur Institute under the tutelage of Professor Calmette. He studied bacteriological science for a period of three months at the college in Paris. He did his thesis and earned his Medical Doctorate in 1930. Hugo majored on the line of blood plasma lipids in his graduate thesis.

After completing his three months in Paris, he returned to Sweden. He took a lecturing position at the Karolinska Institute. Hugo became the resident lecturer in the psychological chemistry department. During his work as a teaching and researching lecturer, Hugo toured several other institutes and compared notes with his peers. In 1931, while working in Uppsala, Sweden, Hugo discovered the crystalline myoglobin in the blood. He noticed the phenomenon while researching at the Svedberg Institute of Physical Chemistry.

In 1932, he moved to the University of Uppsala. He served as the associate professor in the Department of Medical and psychological chemistry for one year. He left the college in 1933. Hugo got a study scholarship from the Rockefeller Foundation and traveled to Germany. He settled in Berlin and worked with scientist Otto Warburg. He continued his research in the role of enzymes in correlation to oxidization of food matter. In 1934, he succeeded in separating an enzyme from yeast. He crystallized the enzyme which turned yellow in color.

After a series of laboratory trials, he successfully removed the enzyme lactoflavin from its protein mother carrier. Hugo examined the enzyme and noticed the protein formation within the enzyme. He concluded that lactoflavin enzyme was protein based.

In 1937, he returned to Stockholm. Hugo became the head director at the Biochemical Department of the Alfred Nobel Medical Institute in the Swedish capital Stockholm. He continued with his bacteriology research throughout the year 1938. With his influence and growing stature, Hugo got elected as the Secretary of the Swedish Medical Society from 1940. He served for six years resigning in 1946.

While serving at the medical society, he continued with his research work. In 1941, he teamed up with another researcher Anders Ehrenberg. The two examined the interrelation of iron with cytochrome. In their findings, they concluded that iron formed the core center of the cytochrome C. Other findings during his research with Anders included a scientific theory called Embedded Heme. They noted in their theory that the iron component in the cytochrome C enzyme has a layer of protective insulation. The layer inhibits the center from oxidizing under exposure to oxygen.

In 1942, he became a member of the Swedish Society for Medical Research. He served in the capacity until 1950. During his membership, Hugo separated and crystalized a peroxidase of horseradish in 1942. The following year, he worked on isolating the enzyme lactoperoxidase from milk. He got elected as the chairperson of the Association of Swedish chemists for two years. He left the office in 1949.

In 1948, Hugo and his team of researchers started working on the components of the liver. They used the liver of a horse as a laboratory sample. Hugo removed through crystallization an enzyme from the horse’s liver for further examination. He worked on the liver until he concluded his findings in 1950. Working with laboratory alcohol; Hugo discovered the enzymes within the liver. He noted that they oxidized the alcohol after coming into contact with it. The enzymes turn the alcohol into an aldehyde. The yeast enzyme inhibits the then reduced the aldehyde back to alcohol.

In 1955, Hugo received the Alfred Nobel Peace Prize in Medicine. He was feted for his research work in the role of enzymes in the human body and other living matter. The findings also included the side effects of some chemical elements on vital enzymes within the body system.

In 1931, Hugo married Elin Margrit Alenius. The couple had four children. Hugo was a talented musician outside the scientific world. As a member of the Swedish Royal Academy of Music, Hugo played the violin.

Hugo died on August 15, 1982, at the age of 79 in Stockholm. His body was buried at the Northern Cemetery next to his wife’s grave.