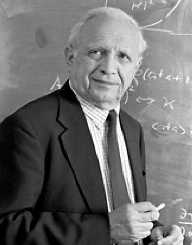 Bertram Neville Brockhouse was born on July 15, 1918, in Lethbridge, Alberta, Canada. He had a sister and a brother. When Bertram was two years old, he and his family moved to the United States, but in winter of 1926, they shortly shifted back to Canada.

Bertram Brockhouse studied at several elementary schools, and later enrolled at the King George High School. He later transferred and graduated from Sunday School of St. John’s United Church. Brockhouse was interested in radio technology since early childhood. He learned the technical aspects of the technology, as well as details about designing and building them. While in school, Brockhouse began working as a laboratory assistant at Aubert Controls Corporation and started his own business of radio repairing. In 1938, the family moved to Vancouver, and with the outbreak of World War II, Brockhouse joined the Royal Canadian Navy.

While Bertram Brockhouse was studying for his Bachelor’s degree, he took a job at the National Research Council laboratory and later moved to Low-Temperature Laboratory at the University of Toronto. After receiving his Ph.D., Brockhousetook a position at the Chalk River Nuclear Laboratory, and began working in Don Hurst’s neutron physics group. This association continued for the next 12 years.

His first experiments at the Chalk River Nuclear Laboratory were scattering of the neutrons by highly absorbing elements. He was invited to work at the Brookhaven National Laboratory on several experiments, where he met several other researchers and learned new methods. In 1954, he presented a paper with results showing the triple-axis spectrometer at the American Physical Society meeting in New York. Just two years later, he completed the first triple-axis spectrometer.

In 1962, Bertram Brockhouse fulfilled his dream of university career and became the Professor of Physics at the McMaster University. There, he was able to teach and continue his research. He continued to work at the university until 1984.

Throughout his career, Bertram Brockhouse received several awards and honors. In 1965, he was elected a Fellow of the Royal Society, and in 1982, he became the Officer of the Order of Canada. His biggest award was the 1994 Nobel Prize in Physics, which he shared with Clifford Shull for developing neutron scattering techniques. The Nobel Prize was awarded the longest waiting time in its history.

To honor his name, a street in Hamilton, Ontario was named after Brockhouse. In 1999, the Division of Condensed Matter and Materials Physics and the Canadian Association of Physicists decided to create the Brockhouse Medal, which is awarded to recognize outstanding theoretical and experimental contributions on condensed matter and material physics.

While Bertram Brockhouse was working at the National Research Council in Ottawa, he met Doris Miller. The couple got married in 1947. Brockhouse and Miller had six children together.

Starting from the 1960s, Bertram Brockhouse began suffering from several health issues, which caused him discomfort throughout the rest of his life. He died on October 13, 2003.