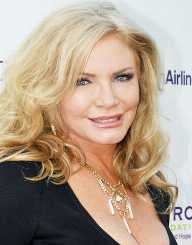 Shannon Tweed began her acting career in 1965. She only acted in role show in this year: Days of Our Lives. After this, she did not act again until the 1980’s.

Her first role once she returned to acting was in a made-for-television movie called Drop-Out-Father. She only had a small role in this movie but gave her a new start to her acting career. After this, she earned a recurring role as Diana Hunter on the show Falcon Crest in 1982.

In the next year, Shannon Tweed appeared in her first feature film called Of Unknown Origins. After this, Tweed mostly performed in one-episode roles on various television shows, including The Dukes of Hazzard, The Last Fling, Nine to Five, and Ohara. She also acted in the films The Surrogate and Steele Justice.

In the 1990’s, Tweed’s acting career remained mostly the same as it was in the 1980’s. Shannon Tweed earned another recurring role in 1991 called Fly by Night and 1st & Ten: The Championship. For the rest of the decade, she returned to acting in small roles in one-episode roles in television shows and small roles in movies. Some of the most famous movies and television shows she worked on include The Naked Truth, Illicit Dreams, Homeboys in Outer Space, Naked Lies, Dead by Dawn, and Detroit Rock City.

In the 2000’s, Tweed’s acting career wasn’t defined by the fiction movies and shows she appeared in, but by the reality show, she starred in. Her relationship with the KISS rock star Gene Simmons earned her a reality show called Gene Simmons Family Jewels. This show began in 2006 and chronicled the lives of Tweed, Simmons, and their children. Before working on this show, Shannon Tweed continued to act in fiction shows and movies, including My Guide to Becoming a Rock Star, The Parkers, and Diaries of Darkness.

Gene Simmons Family Jewels ended in 2012. After this, Shannon Tweed returned to acting. She was the narrator for the show Ex-Wives of Rock and acted on the show Republic of Doyle. In 2014, she starred in another reality show called Shannon & Sophie. This show revolved around the lives of Shannon and her Daughter. It only lasted for one season. Since then, she has had acting roles in the show Seed and the movie Sex, Marriage and Family.

In 2004, Shannon Tweed published her first and only book called Kiss and Tell. This book was all about her life as the girlfriend of Gene Simmons, who was in the band KISS. The memoir also touched on other meaningful areas of her life outside of her relationship.

Shannon Tweed earned the Playboy Playmate of the Year in 1982. She had modeled for this magazine shortly before becoming an actress.

Even though she has over 100 film credits to her name, Tweed has no acting awards.

Shannon Tweed married Gene Simmons in 2011. The couple had been together for about twenty years before their marriage. They have two children together: Nicholas and Sophie Simmons.