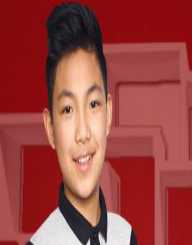 Darren Lyndon Espanto first appeared on television when he was ten years where he joined "The Next Star," a YTV reality show in 2012 where he was part of top six making him the youngest ever finalist. Darren's star rose when he joined "The Voice Kids Philippines" the first season. In 2014, Darren became part of ABS-CBN's Star Magic. Darren  released several albums including "Be with Me," "Parachute" and "Starlight" all which performed well in the music industry

Darren Lyndon Espanto is the first born to Marinel Gonzales and Lyndon Espanto, both of whom were nurses. They immigrated to Canada from Nueva Vizcaya. At a young age, Darren's parents taught him the Filipino language. Darren developed an interest in singing at an early age; at two years, Darren was already singing. Darren's parents encouraged song in front of his relatives to entertain them. When they discovered that the young boy was talented, they urged Darren to pursue his dream relentlessly.

When he attained twelve years, Darren Lyndon Espanto was enrolled at St Jude Elementary in Calgary. His studies were however disrupted when Darren traveled to the Philippines in 2014 to participate in the "Voice Kids." Darren did well and passed his auditions after which he went back to Canada to do his advanced test in St Cyril School. After the test, Darren Lyndon Espanto traveled back to the Philippines and went all the way to the finals of The Voice Kids. As a result of the victory, Darren was awarded ?350,000 scholarships from Eton International School.

In 2012, Darren Lyndon Espanto joined the fifth season of YTV's reality television "The Next Star" where he sang "Grenade" by Bruno Mars. Darren progressed amazingly and got to the top six singing pop songs such as those of Rihanna (Only Girl in the World) and Maroon 5 (Payphone). By this time, Darren had produced his songs "Gotta Give a little Extra," "Now," and "Oh Oh Santa." Darren lost to Brooklyn Roebuck but made history as the youngest competitor to reach finals in the competition. The following year, Darren had his first series as a guest in "Life with Boys" on the YTV reality show.

In 2014, Darren Lyndon Espanto attended the first season of ABS-CBN's show "The Voice Kids" where Darren performed Jessie's "Domino." Darren did very well and impressed the judges who noted his potential in recording his albums.Darren Lyndon Espanto reached the finals after a thrilling performance of Whitney Houston's "One Moment in Time" held at the Newport Performing Arts Theater in Resorts World, Manila. In the finals, Darren received a standing ovation after an outstanding performance of the "Ngayon" by Basil Valdez. Darren finished second in the competition but received numerous positive reviews.

In 2014, Darren Lyndon Espanto refused to go back to Canada since he wanted to act as well as to be near his coach, Sarah Geronimo. In August the same year, Darren became part of the training and management team at ABS-CBN's Star Magic.Darren's rendition of White Houston's" One Moment in Time" ranked the best in Apple's iTunes store on September 11. In December 2014, he did his first solo concert on stage at the Music Museum

On October 25Darren Lyndon Espanto became the headliner at Carnegie Hall at the fourth "The Outstanding Filipino Americans in New York Awards." On November 29, 2014, Darren entered into a record and management contract with MCA Music Inc. After a week, the top three at "The Voice Kids" staged a concert at the Philippines International Convention Center. Darren did release first named "Darren" which started off at position 1at Philippine's charts of the Apple's iTunes Store. The following year on January, Darren performed "Tell the World of His Love" by Trina Belamides when Pope Francis visited the Philippines.

On May 29, Darren Lyndon Espanto became the youngest artist to stage a solo performance in the Mall of Asia Arena when he sang during his birthday concert. On November 18, Darren was honored by a performance in a State Dinner for a delegation from Mexico.

Darren Lyndon Espanto spends most of his time making music. He loves to play saxophone, piano, and drums. His all-around nature in music earned him a nickname "The Total Performer."