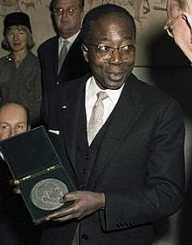 Mamadou Dia was born on July 18, 1910, in Khombole, Western Senegal. Mamadou Dia attended Qur’anic School for his primary education. In 1927, he joined the Willam Ponty School where he graduated from fully trained as a teacher. Dia later got a job as a teacher in St. Louis and Fissel. He was also the director of the Regional School of Fatick. Dia later moved to Paris to study economics.

Before Mamadou Dia entered into politics, he used to publish articles about the economy of Senegal. In 1943, he was motivated to enter politics after the collapse of the Vichy Regime. During that period he collaborated with Leopold Sedar Senghor in laying the foundation of a successful political party, he was appointed the Secretary General of the party. In 1948, Dia was appointed to represent Senegal in the French Senate in Paris, a post that he held until 1956. In 1960, when Senegal gained independence Dia was appointed as the first Prime Minister of Senegal. Dia served alongside Senghor who was made the first President of Senegal. Dia was also the Vice President of the Mali Federation of Senegal which was not a success. He was also the Vice President of French Sudan which collapsed in 1960.

Mamadou Dia took control of the Senegalese economy and implemented radical ideas which were aimed at the reformation of the groundnut sector. His decisions did not impress some people including religious leaders. His ideas led to intense power struggle and members of parliament who were not of his ideas wanted to vote in order to censure him. Mamadou Dia used executive powers to ensure that the votes were not taken. He used the army to lock the assembly building before voting began. Senghor was not impressed and thus concluded that Dia was attempting a coup. Senghor used the military to arrest Dia and his ministers. They were tried for treachery and sentenced to imprisonment. Dia and his ministers remained in prison for more than ten years.

In the mid-1970s, Dia was pardoned and released. In 1981, Dia entered into politics again and founded the People’s Democratic Movement which was not successful since he had little support. Dia continued writing diatribes in the local press until he was old. his diatribes brought him a lot of respect between the opposition parties in Senegal.