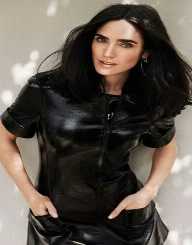 Jennifer Connelly was born on December 12, 1970. She is an American actress. She began her acting career as a child model. She appeared in magazines, newspapers and television advertisements. She started her acting career when she was asked to perform a ballet routine which she did successfully.

When she was a teenager, Jennifer started getting roles to play in mostly Italian movies and English speaking movies as well. She has received several awards during her acting career. She has appeared in movies such as ‘A Beautiful Mind’ and ‘Blood Diamond’ among so many other films.

Jennifer Connelly was born on December 12, 1970, in Cairo, New York, in the Catskill Mountains. She was born to Ilene who is an antique dealer and Gerard Karl Connelly who is a clothing manufacturer. Her mother is Jewish while her father is of Irish and Norwegian descent. She attended Saint Ann’s which was a private school that specialized in Arts. In 1976, her family moved to Woodstock, New York.

Jennifer Connelly became a child model at the age of ten. She signed with the Ford Modeling Agency where she appeared on the covers of magazines and also in Japanese pop songs. In 1984, she appeared in the movie ‘Once Upon a Time in America’ where she performed a ballet routine.

In 1985, she got a lead role in the horror movie ‘Phenomena’ and ‘Seven Minutes in Heaven.’ In 1986, she starred in the film ‘Labyrinth’ which was not received well by critics. In 1988, she joined Yale to Study English after taking a break from the acting scene. She later joined Stanford to take Drama.

In 1990, Jennifer Connelly left Stanford to act in ‘The Hot Stop.’ Her parents encouraged her not to give up on acting. In 1991, she appeared in the romantic comedy ‘Career Opportunities’ alongside Frank Whaley. She also appeared in Disney’s ‘The Rocketeer.’ In 1996, she did a controversial nude scene in the film ‘Mulholland Falls’ in which she played a mistress.

In 1997, Jennifer Connelly appeared in ‘Dark City.’ Her character in the movie charmed several people. In 2000, she appeared in the film ‘Requiem for a Dream’. This film was the starting point of her career in acting. She played the role of a woman who gets addicted and becomes a prostitute. She appeared in the ‘Walking Dead’ a film that she played so perfectly until she charmed the director of the film.

In 2001, she featured in the film ‘A Beautiful Mind.’ This film made her win an Oscar, Golden Globe Award and a BAFTA Award for her role as Alicia Nash in the film. In 2003, she acted in ‘The Hulk.’ At this time her popularity had shot to the sky as she impressed and charmed the general public with the way she acted.

In 2003, Jennifer Connelly appeared in ‘House of Sand and Fog’ which was based on a novel by Andre Dubus III. Jennifer took a break from acting for two years before she returned in ‘Dark Water’ which was released in 2005.

In 2006, she did ‘Blood Diamond’ alongside Leonardo DiCaprio. She continued to prove her acting skills, and in 2007 she did ‘Reservation Road.’ In 2008 and 2009, she did ‘The Day the Earth Stood Still’ and ‘He’s Just Not That Into You’ respectively.

In 2009, Jennifer Connelly appeared in the film ‘Creation’ which was based on Charles Darwin’s life. In 2011, she did ‘The Dilemma’ and ‘Salvation Boulevard’ alongside Vince Vaughn and Greg Kinnear respectively.

In 2003, Jennifer Connelly got married to actor Paul Bettany with whom she has two children, Stellan and Agnes.