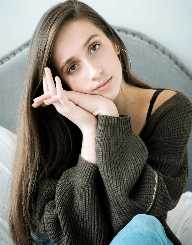 A force that other forces cannot stop is simply an unstoppable force. Tate McRae is not only unstoppable for others to stop but talented. She is a simple, innocent and happy girl like any other girl with a funky style and casual mannerism. She is also a lover of pets especially dogs that love going out with her friends. One of her love is bike and vacations with her family member. She enjoys and goes after everything that a normal teenager would want to do. However, Tate McRae is another thing else when she enters the arena of dance.

She is always ready to put the world on fire with her crazy and energetic dance steps. Tate McRae was the winner of the mini Best Dancer title of the 2013 version of Dance Award, New York. She is also known to have triumphed in some dance contests before being featured in a music video as a dancer. Apart from dance, she is an ambassador for a brand, an aspiring songwriter as well as a Capezio athlete.

Tate McRae seems to be born to be a star as her mother is a dancer. She seems to get her dance gene from her mother whose steps she followed in becoming a very wonderful dancer. She enrolled officially in a ballet dance school at the age of 6. She, with her inherent talent, became the talk of the town with her wonderful dance steps. She later earned the Dance Awards’ 2013 Mini Best Dancer Title due to her impressive control and flexibility. In 2014, she earned a spot on the Dancerpalooza Beat Squad for the Capezio Athlete competition.

Tate McRae went on to win a silver medal during the New York Youth Grand Prix in 2015. She then gained two weeks of intensive training scholarship with Berlin State Ballet School. He later became the main contestant as of the Fox Network show, SO You Think You Can Dance: The Next Generation. She went ahead in winning as the top female contestant in the competition and finished as the second runner-up.

Something that is a little bit unbelievable about Tate McRae is that she has been able to master all major forms of dance ranging from hip-hop, jazz to ballet. Mastering a dance is very hectic, but McRae was able to master five dance forms. Is that not a rare thing to do? This is what makes her very special. By the time she turned 10, she has become a star on the stage doing virtually everything with just her dance shoe tied to her feet. She later won the Mini Best Dancer title which later became her stepping stone to success. Apart from this, she is an embodiment of talent as she can act, sing, and dance. Currently, she is a social media personality.

Tate McRae seems to have a good understanding of what she wants to become in life. She is known to have a flourishing career and has followed her passion at a very early age. She is very versed in all version of dance and not limited to Ballet alone. He is known to have excelled as an actress with several voice performances. Apart from this, she is a singer as well as a songwriter with a good enthusiasm for modeling. She is a dancewear designer and has her line which she called TWEAR dancewear. She is also known to have taken voice lessons as well as rhythmic coach to keep her up regarding flexibility and strength. In her hometown, Calgary, Canada, she holds dance conventions.

Tate McRae was born on the 1st day of July 2003 to a professional dancer in Calgary, Canada. She is a very natural dancer with a great flair for dancing. She has been dancing ever since she was an infant and have spent the first two years of her life observing dancers at her mother’s studio. Tate McRae later shifted to the Middle East before going to Alberta, Canada where he took up formal training in dance. She was six years old when she took up the formal training. She trains at least 25 hours per week at her dance school. She currently studies Ballet, Jazz, Hip Hop, Contemporary and Ballroom dance at School of Alberta. She is also a regular with the YYC Dance Project.