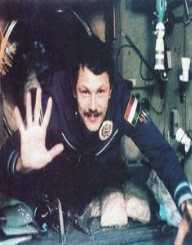 Georgi Ivanov was first Bulgaria’s Astronaut and was a retired Lieutenant. He is known to have schooled at the military school before he entered into the Bulgarian army. He later became the Military pilot that transport the force through different designations as well as locations. He is known to have been suggested for the International Space intercosmos Programme which was conducted by the then Soviet Union.

He later got launched to dock in Orbit with the Salyut 6 Space Station for the Soyuz 33 mission. Georgi Ivanov later became the first pilot cosmonaut to orbit in space that Bulgaria would ever have. He became very popular among the people in Bulgaria despite the fact that the mission failed due to an engine error. He later received many awards from Bulgaria as well as the Soviet Union before he resumed his military service. He later joined politics in his later years helping in the creation of the first democratic constitution.

Georgi Ivanov was born to Ivan Ivanov and Anastasiya Kakalova on July 2, 1940, as Georgi Kakalov in Lovech, Bulgaria. He went to the Military Air Force School and became a flight engineer as well as a Class-I pilot.

Upon the completion of his education, he drifted into the Bulgarian Army where he served as a military pilot before becoming an instructor years later. Georgi Ivanov later got appointed as the Squadron Commander of the fighter aircraft in the force. After meticulous service, he got selected in 1978 to serve as a member of the Soviet Union’s International Space Intercosmos Programme. He changed his name to Ivana due to the negative implication of Kakalove.

He was chosen for the fourth mission to travel into space which was being undertaken by the INtercosmos program. This happened after he had undergone very serious and rigorous training. The journey was started when he traveled with the Soyuz 33 manned Space flight on April 10, 1979. Before reaching their goal, the main engine failed, and the spacecraft was later returned to the earth after completing 31 full orbits around the world. They, however, stayed in the space for one day, 23 hours and 1 minutes. He was welcomed like a hero at home and received numerous awards both at home, Bulgaria and by the Soviet Union. These accolades do not take cognizance of the mission’s failure.

At the end of this mission, he embraced his military service again in Bulgaria and furthered his study to obtain a doctorate in aerospace engineering. Georgi Ivanov was later appointed in 1991 to the National Assembly and was able to support the establishment of the first democratic constitution in the country. He later launched his cargo airline in 1992 as Air Sofia. This was renamed as United International Airlines relocating to Serbia in 2007. The airline later lost its license and operations got ceased in 2008. He established his legacy by founding Future in Space Foundation which is one of the members of the Association of the Space Explorers.

Georgi Ivanov became the first Bulgarian astronaut to travel to space by being a part of the Soyuz 33 mission. He also helped Bulgaria enter the privileged club of the Astronaut nations making it the sixth nation to send cosmonauts to space.

Having returned from the space then, Georgi Ivanov was honored with many awards which included the Hero of the Soviet Union and Hero of the People’s Republic of Bulgaria titles. He was also hailed by many people upon his return from his space trip in 1979 despite its failure. Later on, he received the Order of Lenin and Order of Georgi Dimitrov titles making him an honorary citizen of Lovech in 1979. By 2004, he became a 1st class with Sword after being honored with the Order of Stara Planina by the Bulgarian government.

Georgi Ivanov was not too successful with marriages as he was first married to Natalya Rousanova and had a daughter, Ani with her. They however divorced in 1982 before he married Lidia. He fathered a son, Ivan with Lidia in 1984. He is a lover of fishing and skiing. He also takes on golfing during his leisure time.