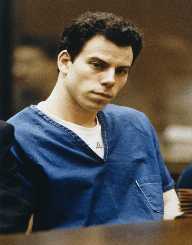 Erik Menendez is remembered for killing his parents together with his elder brother Joseph Lyle Menéndez in 1989. The two are serving a lifetime jail imprisonment.

Erik Menendez was born on 27th November 1970 at Gloucester Township. His parents José Menéndez, an entertainment executive and Mary Kitty were a wealthy couple.

Erick and his brother attended Princeton Day School. As a result of his father's job, the family moved to Calabasas, California where the boys spent the rest of their early life.

A year after moving to California, the Menendez brothers enrolled in a high school at Calabasas. In high school, both were average students. Besides his school work, Erik Menendez played tennis. He was the 44th in the US under 18 tennis rankings.

In California, the boys associated more with troubled making kids. Erick twice faced burglary charges in 1988. In high school, he came up with a script about wealthy parents killed by their son, a story that later depicted his life story.

In the evening of 20th August 1989, Joseph Lyle Menéndez and his wife were both in their home in Beverly Hills. Erik Menendez made entry into the room and shot Jose on the back of his head twice killing him on the spot.

On hearing the shots, Kitty ran to the scene where she almost met her untimely death. While trying to run, the bullet hit her on the leg where she fell. Her son went on to shoot her several times, and she died on the spot.

To make the act look like an organized crime, both victims had gun wounds on the kneecap. The brothers later fled from the scene after committing the crime.

They both returned home at 11.47. Lyle then called the police to report of their parent's death. In their report, they claimed to be in the movies at the time of the murder.

They later changed their statement. Instead, they were in the annual Taste of LA festival held at Santa Monica Civic Auditorium.

Their statements made them turn from victims to suspects. Limited concrete evidence linking the boys to the murder of their parents prevented the police from investigating them.

Soon after their parents died, the boys went on a spending spree. They took advantage of the newfound family wealth. Erik Menendez hired an expensive tennis coach while Lyle purchased an expensive Rolex watch. The two left their parents mansion opting to live near Marina Del Rey.

Using their dead mother's convertible Mercedes-Benz SL, they both drove around Los Angeles dining and wining at expensive restaurants. Between the day their parents were murdered and arrest, it is estimated that they spent close to $700,000.

Months after the act, Erik Menendez became increasingly burdened by the guilt. As a result, confessed the crime to his therapist. Lyle went on to threaten, Erick's therapist after learning that his brother had admitted their crime. L. Jerome Oziel told his girlfriend about the threats.

Lyle arrest came after; Oziel's girlfriend tipped the police about the brother's involvement in the murder. Erick surrendered upon returning from Israel.

The judge failed to grant them bail. During the trial, they stayed in different cells. After a lengthy court process, the brothers were found guilty of murdering their parents.

The two were convicted for two accounts of first-degree murders. The jury sentenced them to life imprisonment.

Erik Menendez married Ruth Saccoman at the prison waiting room. Even though they are physically detached, Ruth claims she is attached to her imprisoned husband emotionally.

In a documentary, The Menendez Murders: Erik Tells All produced in 2010, Erick recalls how both murders took place and the aftermath events after the crime.