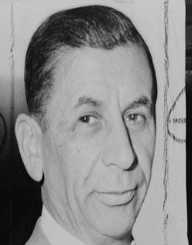 Meyer Lansky born Meir Suchowlanskiand popularly known as “Mob’s Accountant” was an infamously American organised criminal figure. Born on July 4, 1902, he played a vital role in developing the National Crime Syndicate in the United States of America alongside his crime partner Charles “Mucky” Luciano. Lansky was associated with crime syndicates like the Jewish Mob and the Italian-American Mafia. He was successful in developing a gambling empire across the world and had stakes in casinos in Las Vegas, London, The Bahamas, and Cuba.

A smart crime figure, Lansky did not face any serious criminal charges aside from illegal gambling charges. He is said to be one of the most financially successful crime figures in American history, with an estimated worth of $20 million before escaping to Cuba. However, he left an estate of just $57,000 when he died.

Meir Suchowla?ski was born on July 4, 1902, in Grodno in the then Russian Empire (presently Belarus). His parents were Polish-Jewish who suffered anti-Semitic persecution. He always referred to Poland as his native country. His father emigrated to the United States in 1909, and two years later, Lansky, his brother, and mother followed.

They entered the US through the port of Odessa and settled, settling on the Lower East Side of Manhattan in New York. While there, Meyer Lansky became friends with Bugsy Siegel, and the two would later become partners in bootlegging trade. They also managed one of the violent Prohibition gangs, the Bug and Mayer Mob. During his teenage, he also befriended Charles “Lucky” Luciano, who also became his partner in crime.

Meyer Lansky involved in several crimes as a teenager and by 1938, he had established successful gambling operations in Cuba, Florida, and New Orleans. To be safe from prosecutions and avert the fate of crime figure Al Capone of being sent to prison for tax evasion, all earnings from the illegal gambling operations were transferred to a Swiss Bank accounts. In Switzerland, the 1934 Swiss Banking Act provided a nondisclosure of account holders, so the country is a haven for illegal earnings.

Meyer Lansky and some members of the Italian-American Mafia invested in Bugsy Siegel’s Flamingo Hotel. The business kept posting losses, which infuriated the Mafia investors and decided to assassinate Siegel. Lansky, a childhood friend of Siegel initially managed to convince them to give Siegel some time to prove himself. The losses continued to happen, and on June 20, 1947, Siegel was shot dead in Beverly Hills, California.

Sources at the FBI says Lansky, continued to have stakes in Flamingo in the next 20 years. Aside from gambling, he was also in narcotic smuggling, prostitution, and pornography, among other illegal activities.

Meyer Lansky built friendship and business relationship with Cuban dictator Fulgencio Batista. Batista gave Lansky and the Mafia some control over Havana’s racetrack and casinos in exchange for bribes. Lansky became the centre of the gambling operations in Cuba. Batista was overthrown from office with a new President Carlos Prio Socarras taking office. His administration slowed the development of gambling in Cuba and Lansky offered him a $250,000 bribe to step down for Batista to retake power.

Through a military coup in March 1952, Batista returned to power and again boosted gambling activities. He made Lansky an unofficial gambling minister with a monthly salary of $25,000.Lansky built a luxurious hotel, the $18 million 440-room Habana Riviera.

Rise to Power of Fidel Castro

After the 1959 Cuban Revolution, Fidel Castro took office, and that was the end of the illegal gambling syndicate in the country. Meyer Lansky's casino and that of many others were looted after the revolution. He managed to escape to the Bahamas. Castro outlawed gambling in Cuba and shut down all the hotel-casino. This affected Lansky significantly, losing an estimated $7 million. Casinos in Miami also shut, and his only stream of income was revenue from the Las Vegas casino.

In the Bahamas, Meyer Lansky built a casino on the Grand Bahama and Paradise islands, extending his operations to other parts of the Caribbean. His worth around this time was estimated at $300 million. Lansky fled to Herzliva Pituah, Israel in 1970, to escape federal tax evasion charges from the US. He was deported to the US in 1972 to face trial. He faced tax evasion trial but was acquitted in 1974.

Meyer Lansky married twice first to Anna Citron from 1929 to 1947. A year after the divorce, he married Thelma Schwartz in 1983 until his death in 1983. He had three children, Sandra, Buddy, and Paul Lansky. Lansky died on January 15, 1983, of lung cancer. He was interred at Mount Nebo Cemetery, Florida.