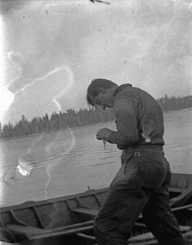 Tom Thomson was well known as one of the most brilliant, influential and pioneering artists in the early 20th century.

Tom Thomson was a Canadian artist who began his career as an amateur painter and struggled to overcome various obstacles that came his way - including lack of knowledge of the technical side of painting to become an enduringly popular Canadian artist.

The largely self-taught artist had a strong ability to convey the dynamism and volatility of nature in his work. Moreover, Tom had exceptional control of color, and his work had some stylistic resemblance to the work of European.

His immense appreciation for art was attributed to his Victorian upbringing.

Tom Thomson was born on 5th August 1877 near Cleremount, Ontario to Mr. John and his wife, Margaret Thomson.

Tom Thomson was the sixth born in a family of ten. Two months after his birth, his family relocated to a new home in Rose Hill, north-east of Owen Sound. As a young boy, Tom was enthusiastic about sports, hunting, swimming, and fishing. Music, design, and drawing were also his valuable pursuits. Because Tom Thomson was raised in the farm, he received his education locally. However, ill health kept him out of school for a long period.

In 1899, Tom Thomson volunteered to fight in the second Boer war. He was, however, turned down due to health reasons. The same year, he entered a machine shop apprenticeship at Kennedy’s iron foundry. William Kennedy was his father’s close friend. Here, Tom Thomson only worked for eight months before he was fired by a foreman who complained of his tardiness. Tom Thomson also worked as a fire ranger in Algonquin Park after being denied entry to the Canadian Expeditionary Force that participated in the First World War

In 1901. Tom Thomson briefly attended a business college in Chatham, Ontario where he studied for only eight months before dropping out because he was still undecided on a career. The same year, he moved to Settle, Washington where he joined his elder brother, George Thomson, who owned a business college in the area. It was at Settle that he became proficient in lettering and design and even, later, worked as a commercial artist for Maring and Ladd and then to Settle Engraving Company.

In 1904, Tom Thomson returned to Canada and was employed at Legg Brothers, a photo-engraving firm in Toronto, as a senior artist.

Tom Thomson occasionally returned to Owen Sound to visit his family. Early in 1909, Thomson joined Grip Limited, an artistic design firm based in Toronto. It was here that he met his friends, most of who later became members of the Group of Seven.

In 1906, Tom Thomson joined the Central Ontario School of Art and Design where he attended night classes. The knowledge he gained from this institution, together with encouragements from fellow comrades at Grip Limited as well as the Grip director Mr. MacDonald.
In 1912, Tom Thomson together with several other designers left Grip to work at Rous Mann, another Toronto firm.

The same year, he visited Algonquin Park and often traveled around Ontario, more so to its wilderness, mostly with his colleagues. In 1913, he exhibited with Ontario Society of Artists before becoming a member in 1914 and continued exhibiting with them till his death.

The same year, Tom Thomson experienced a turning point in his career after the National Gallery of Canada started acquiring his paintings. He produced a good number of his most famous works including the West Wind and Jack Pine during the next three years. In Algonquin Park, he became an expert woodsman and canoeist.

The city of Owen Sound’s Art Gallery is named after Tom Thomson. He also pioneered the formation of the Group of Seven, formed after his death, which became Canada’s first National school of painting.

During the time he was in Washington, Tom Thomson met Alice Elinor Lambert with whom he had a brief summer romance and even looked forward to marrying. He however later abandoned the matrimonial ambitions and left for Toronto. As such, he never married.

On 8th July 1917, Tom Thomson while on a canoeing trip to Canoe Lake in Algonquin Park just disappeared.

Eight days later, his dead body was discovered in the lake. Upon his body’s examination by Dr. Goldwin Howland, it was established that he died out of dawning. This was further supported by Dr. Arthur E. Ranney who also stated that the drawing was accidental.

Many people, however, termed his death as mysterious and even doubted the report by the two doctors. His body was first buried in Mowat Cemetery near Canoe Lake but was later exhumed and was re-interred in the family plot on July 21st following his elder brother’s direction.